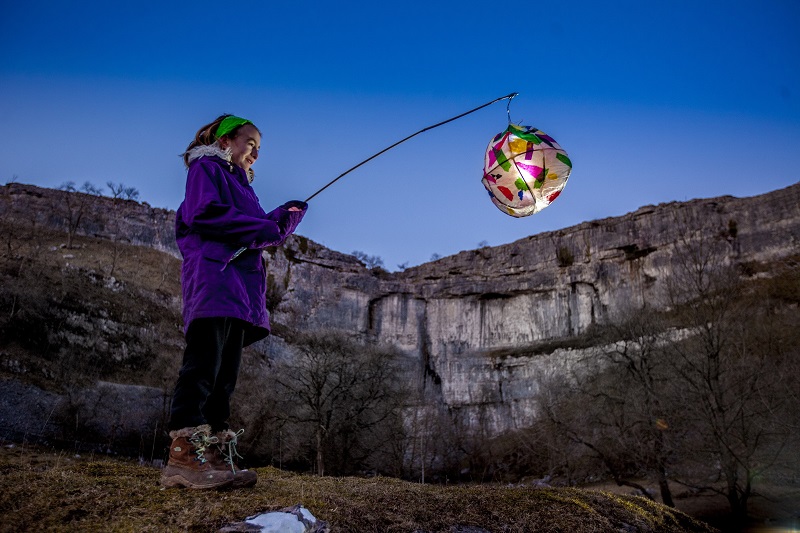 Visitors to the Yorkshire Dales and Nidderdale AONB will be able to enjoy a host of new moon-themed activities during next February’s Dark Skies Festival to celebrate the 50th anniversary of the 1st lunar landing by astronauts Buzz Aldrin and Neil Armstrong.

The Festival which is organised jointly by the Yorkshire Dales and North York Moors National Park Authorities will take place from 15 February to 3 March and will also coincide with the appearance of one of only three Supermoons in the sky during 2019.

To make the most of this cosmic event businesses and attractions across the Yorkshire Dales and Nidderdale are lining up innovative ways for visitors to enjoy and learn more about the moon at a time when it will be at its closest to earth.

For instance How Stean Gorge is organising evening canoeing sessions at Scar House Reservoir in Upper Nidderdale while Brymor ice cream at Jervaulx near Masham will be hosting a star party on the night of the Supermoon (19 February).

Over in Hawes Stage1 Cycles is organising an after-dark Big Moon mountain bike challenge ride in aid of the Swaledale Mountain Rescue team. Youngsters will be able to tackle a five-mile course while older mountain bikers can challenge themselves with either a 10 or 15-mile route.

Meanwhile visitors looking for a more sedately-paced evening can head to the terrace at Simonstone Hall for a spot of Supermoon gazing with a glass of wine in-hand in the company of expert astronomer Richard Darn.

For youngsters there’s a Forest Schools Moonbeam evening on the shores of Semerwater where activities will include making a moon raft and decorating moon rocks.

Auctioneers Tennants of Leyburn are also getting involved for the first time and will be hosting a pop-up planetarium that will send festival-goers on a virtual tour of the universe where they can imagine life as an astronaut on a space station or go on an expedition in search of aliens.

Britain’s highest public house Tan Hill will also be making the most of its moorland location near Keld to hold moon and stargazing sessions.

Helen Dalton, destination co-ordinator for the Yorkshire Dales National Park Authority comments: “The milestone anniversary of Apollo 11’s remarkable mission makes the 2019 Dark Skies Festival even more relevant in highlighting the discoveries made and how much is still unknown about space.

“It captures people’s imaginations which is why the Festival will showcase the myriad ways that people can venture out after-dark and appreciate the natural spectacle above their heads.”

Further programme information and booking details will be available over the coming months on www.darkskiesnationalparks.org.uk. A number of events will be free while others will have a small charge attached.