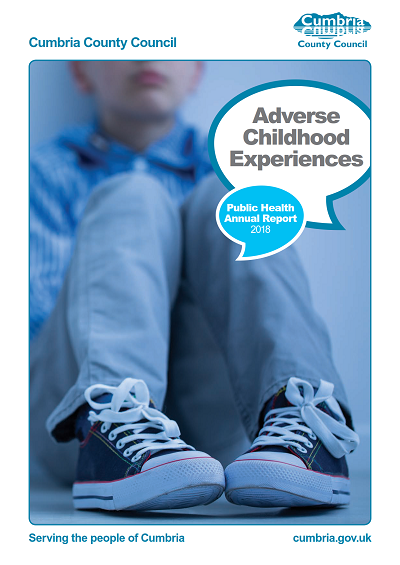 Adverse Childhood Experiences are the focus of this year’s Annual Report from Cumbria’s Director of Public Health, which was published online at cumbria.gov.uk.

Adverse Childhood Experiences (ACEs) are stressful or traumatic events which can happen in childhood and result in damaging effects to long-term mental health and even lead to health harming behaviours like drug misuse, overeating, unprotected sex and smoking. ACEs can include issues that affect a child or young person directly, such as abuse or neglect, or indirectly through the environment they live in. A large survey comprising of 3,885 adults in England was conducted in 2013 and showed that just under half (48%) had experienced at least one adverse childhood experience.

This year’s Public Health Annual Report describes what ACEs are and the impact that they can have on both individuals and communities and attempts to estimate the scale of the problem in Cumbria. It then goes on to explore what can be done to prevent ACEs and to mitigate against their effects. Finally, it identifies the work that is being done across Cumbria to address this problem and makes recommendations for future strategy.

Tackling ACEs in Cumbria has the potential to bring about far reaching, lasting improvements in the health and wellbeing of the whole population. In turn, this would reduce the number of people suffering from conditions such as type 2 diabetes, lung cancer, heart disease and stroke. Furthermore, given the strong relationship between childhood adversity and the development of mental health problems, preventing ACEs and mitigating against their effects could have a significant impact on mental health outcomes throughout the county.

“ACEs not only have the potential to cause immediate physical and mental harm to children, but can also have a lasting impact on our health, wellbeing and behaviour throughout life.

“Given how common ACEs are I am very aware that many people who read the report will have personal experience of them, and some may be affected by the content of the report.

“While this may be a challenging subject, in many ways it is a story of hope, reducing the impact of ACEs is possible and support is available. I hope that this report can contribute in some way to stopping people from suffering in silence.”

Evidence suggests that ACEs are common in many countries around the world, and the United Kingdom is no exception. In Cumbria, it is estimated that there may be over 188,000 adults currently living in the county who have grown up with at least one adverse childhood experience, and over 36,000 have been exposed to four or more. Furthermore, it could be that 46,000 children currently living in Cumbria will experience at least one ACE before their 18th birthday.

Evidence also suggests that adults who have previously been exposed to four or more ACEs are significantly more likely to suffer from a wide range of physical and mental health problems compared to those exposed to none. These include obesity, diabetes, heart disease, cancer, stroke, depression and sexually transmitted diseases. In addition, they are also more likely to experience divorce, financial difficulty, unemployment, incarceration, and to be a perpetrator or victim of violence.

Councillor Deborah Earl, Cabinet Member for Public Health and Community Services, said: “I very much welcome this year’s report from the Director of Public Health. Preventing ACEs altogether would not only help to make childhoods happier, it would also make lives healthier and could lead to significant improvements in a wide range of public health problems such as smoking, binge drinking, drug use, obesity and violence.

“The good news is that many ACEs can be prevented through the provision of services that address the needs of children and their families, but also requires wider changes and the provision of safe, stable and nurturing relationships and environments for children to grow up in.”

Read the report in full at www.cumbria.gov.uk/publichealth/annualreports.asp.