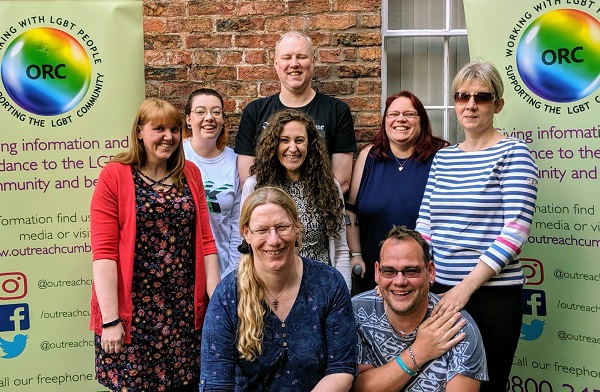 OutREACH Cumbria have been shortlisted for the Community Organisation Award for LGBT at the National Diversity Awards 2019.

Over 28,000 people nominated this year alone and the results are finally in for the National Diversity Awards (NDA), with OutREACH Cumbria amongst 124 nominees being recognised, in a variety of categories, for their achievements nationwide. The event is to be held in Liverpool’s Anglican Cathedral on the on 20th September and OutREACH Cumbria hope to be crowned with the LGBT Community Organisation of the year award for 2019.

Laura Cairns, Chair of OutREACH Cumbria said: “To have even been nominated for this award was incredible, but when we found out we had been shortlisted we were thrilled. I don’t think any of us expected to have been shortlisted with so many deserving organisations being nominated, but it shows how crucial we are to the LGBT+ community in Cumbria. The last 12 months has seen a lot of change for the organisation, with an energetic new committee, a new online magazine and the ongoing development of our counselling service so we are really pleased to have been recognised in this way. For it to fall in our 25th anniversary year is icing on the cake, and a real cause for celebration.”

Of course OutREACH Cumbria are no strangers to recognition having picked up a number of awards in the Diverse Cumbria awards with the organisation voted the Community Group/Organisation of the Year in 2017 and committee members picking up two ‘Positive Role Model of the Year Awards’ (2017 & 2019) and one Lifetime Achievement Award (2016).

Debbie Wood, Talking Therapies Lead at OutREACH Cumbria said: “This is immensely important recognition for the work we are doing and we are all very grateful to whoever nominated us and everyone who voted for us. It takes on even more importance as funding for community projects becomes very difficult to secure. We have a number of important projects in progress and in the pipeline and I sincerely hope our shortlisting, and perhaps even an award itself, will encourage funders and organisations to recognise the vital work we do and offer us the ongoing  financial support we need to make these things happen. Please get in touch at [email protected]”

Actress and comedian Sally Phillips will take centre stage on 20th September as the official host of this year’s ceremony which is supported by a host of companies and organisations including ITV News, HSBC, Direct Line Group, MI5, Auto Trader and Morgan Sindall. Previous winners include actor Warwick Davis, footballs equality and inclusion organisation Kick It Out and freedom fighter Abbey Kiwanuka. Paul Sesay, Founder and CEO of the National Diversity Awards added “A record amount of nominations and votes were received this year, the most we have ever received. I know our judging panel had an incredibly difficult task of whittling down the nominees to create an outstanding shortlist.

OutREACH Cumbria thanks everyone who has supported us over the years and look forward to both the event and working with the LGBT+ Community in Cumbria, and beyond, for the foreseeable future.

To view a full list of nominees please visit www.nationaldiversityawards.co.uk/shortlist