A Corner of Old Penrith 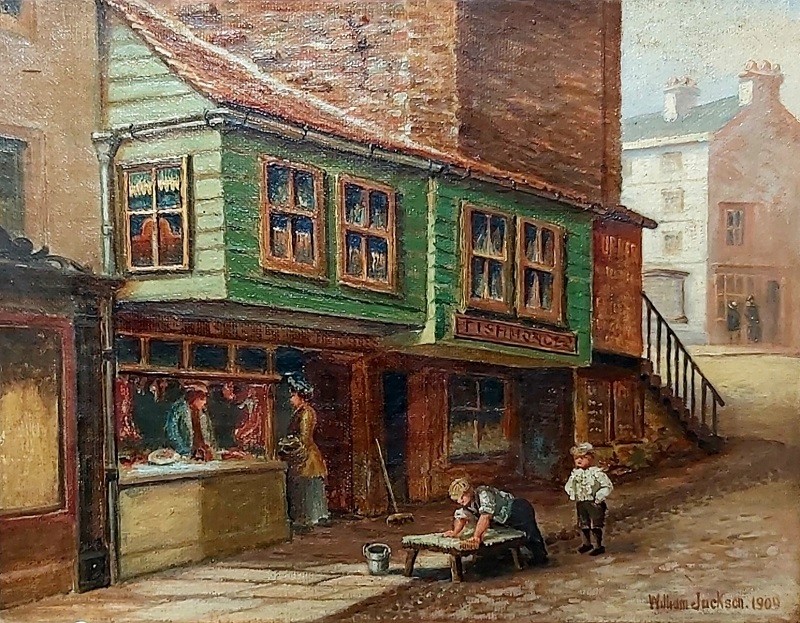 Penrith and Eden Museum has added a picture to its art collection. Titled ‘A Corner of Old Time Penrith’ it was painted by William Jackson, and was left to the Museum in the will of Mary Laycock Newman of Christchurch. Painted in oils on canvas the subject is dated 1909 and shows shops at the corner of King Street and Market Square, Penrith – including  a butcher’s, a fishmonger’s and the premises of John Turner, watchmaker who also traded as a jeweller and gunsmith.

The entrance to the latter was via a stone staircase which can be clearly seen. These were all removed to improve vehicle access as reported later in the ‘Herald’ newspaper –

“At the Crown Hotel on Thursday Messrs. Thornborrow and Co. sold the shop and premises in Market Square owned and occupied by the late Mr. John Turner, watchmaker, and the two shops adjoining for £2, 280 pounds to the Urban Council who intend to carry out street widening.”

Judging by a report in the’ Penrith Observer’ in 1890 the location had long been considered an accident blackspot . In March of that year a child of the same John Turner had  narrowly escaped being run over at this narrow entrance to King Street. It was  –

“Running across the street, and was knocked down by the horse in a conveyance, but a passer-by promptly rescued the child from its dangerous position among the horse’s feet, and it thus escaped without sustaining any injuries. Just a few minutes before, at the same place, a collision between a ‘bus and a cart was narrowly averted.”

The work, an oil on canvas, is signed by the artist.  His talents, particularly as a painter of scenery for productions by the Penrith Amateur Dramatic Society had been noted by the local press, the ‘Observer’ praising his rendering of the exterior of the prison, the ruins of St. Bridget’s Abbey, and the Coot’s  Nest  for Boucicault’s popular Irish play ‘The Shaughraun’. His death was reported in 1928.

Being quaint and irregular looking survivals,  the buildings  had, unsurprisingly, already caught the attention of another amateur artist,  John Thompson (d.1914), who ran a hairdressing business in Angel Lane. His oil  painting on panel ‘W Robinson’s Fishmongers Shop’ painted probably around the turn of the century,  affords an interesting comparison and can be seen to the left of the Porthouse grandfather clock in the Museum’s first gallery.

The curators at the Museum  Dr. Sydney Chapman and Rebecca Short are trying to find out more about the artist. If you have information they can be contacted at [email protected] tel. 01768 865105.