Doug Irving, Tony Robinson and Graham Coulthard cycled 456 miles from the north to the south of the Emerald Isle in June. Taking in the natural beauty that Ireland has to offer, they joined more than 30 other riders at Ireland’s most northerly point before passing the lakes and mountains and historic towns in Ireland and finishing on the beautiful Irish coast on week later.

Doug said: “We thoroughly enjoyed it.

“We met some fantastic people and took in some superb views along the way. Everyone looked after each other, if you were having a tough day or struggling, people would pull you along. It was really good and quite emotional at the end when we all completed it.” 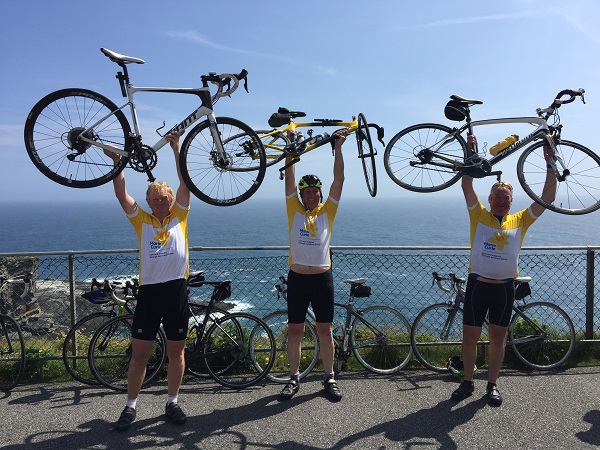 The three friends raised their money through sponsorship, as well as an event at The Crown Hotel in Wetherall to help increase their funds which will go towards offering care and support to patients and their families living with a terminal illness.

Community Fundraiser Hayley Revell said: “It’s been great to hear how much Doug, Graham and Tony enjoyed their cycle challenge, it sounds like they had so much fun raising the money as well as on the cycle itself.

“We are so grateful to them for taking on such a challenge and putting the effort in to the training and preparation too. It really does help support patients and families living with a terminal illness, at a time when they need it most.”