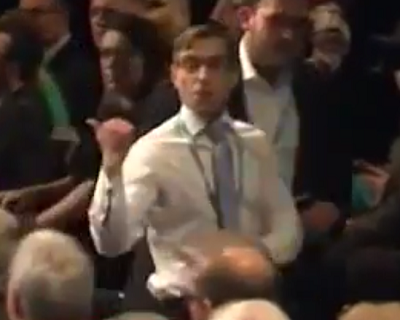 [A] man has been arrested after Theresa May’s keynote speech to Tory conference was interrupted by notorious prankster Lee Nelson aka Simon Brodkin.

In the middle of the Prime Minister’s address, the comedian got up on stage and handed her a mock P45.

“Officers attended and the man was arrested to prevent a breach of the peace and was released a short time later.

“The man had legitimate accreditation which granted him access to the conference site.

“In light of this we will be reviewing the accreditation process with the Conservative Party.

“Even with accreditation, everyone at the conference goes through airport-style searches before being allowed entry to the site.”