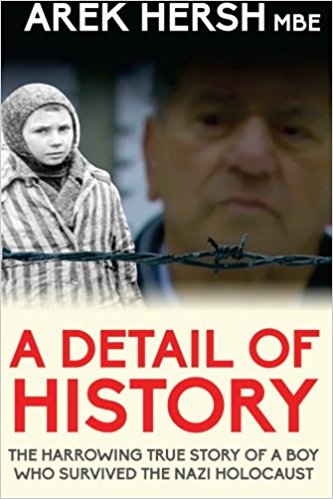 [M]r Arek Hersh MBE, a survivor of the Auschwitz concentration camp in Poland, will be attending Cumbria House on Wednesday, 24 January 2018 from 2pm to share his Holocaust experiences with council staff. Following the talk, an exhibition will take place from 3pm in the conference room where council staff and the general public are invited to meet Mr Hersh and view the exhibition.

The exhibition will show a timeline of the Holocaust, Nazi persecution and subsequent genocides in Cambodia, Rwanda, Bosnia and Darfur through a display of harrowing photographs.

The theme of this year’s Holocaust Memorial Day is ‘The Power of Words.’ The aftermath of the Holocaust and subsequent genocides continues to raise challenging questions for individuals, communities and nations.

Cllr Deborah Earl, cabinet member for communities, said: “It’s important we learn from the past to create a better future.  Holocaust Memorial Day is a time for us all to remember the millions of people killed under regimes of hatred or who have suffered atrocities.

“It is also a time to recognise that there are still people today who are persecuted because of their sex, race, gender and religious beliefs.

“Cumbria has welcomed and provided a safe haven for those who suffered from the Holocaust and the Bosnian genocide.  In times of trouble, the generous people of Cumbria open their doors and hearts to survivors.

“The exhibition will highlight the continuing need for understanding between different cultures and I would urge people to take a little time to visit one of the exhibitions and hopefully inspire others to take action.”