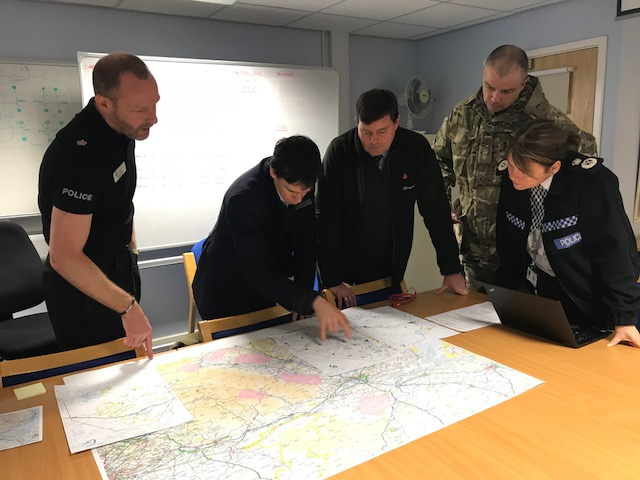 [T]he multi-agency strategic co-ordination group (SCG) set up in response to the adverse weather has been stood down.

The group, which was formed to provide a unified response to the extreme snowfall, high winds and sub-zero temperatures experienced in Cumbria over the last seven days, has concluded today (March 6th).

Those that were part of the group included emergency services, volunteer groups and service providers (further details can be found below).

Whilst the agencies were working together to provide a response, members of the public showed community spirit and bravery in setting up their own groups to provide localised responses, and to look out for and support one another, particularly those most vulnerable.

Although the majority of roads are now cleared, many roads are still icy and snowdrifts built-up by the sides of roads could cause issues if they collapse onto lanes.

Drivers are advised to drive slowly, to the conditions they face, and to make sure they have the correct provisions and clothing when travelling. This includes a fully charged phone and enough fuel.

Superintendent Justin Bibby said: “The snowfall we experienced last week was not common to Cumbria and it created many challenges for the County.

“During the last seven days the public have been amazing. The bravery and community spirit I’ve seen has been inspiring and many selfless acts were witnessed. The support we received made a real difference to the recovery effort and to the wellbeing of the vulnerable individuals that people supported.

“Our partner agencies have also shown true resilience, working around the clock together to get Cumbria moving again.

“A special thanks goes to the Mountain Rescue Teams, who are made up of volunteers. They have been at the heart of many rescues, have helped reach cut-off communities, and deliver provisions. This special thanks extends to all the voluntary organisations involved in the effort including North West 4×4 Responders, St John’s Ambulance and The British Red Cross.

“This week has ultimately been about working together and the support and co-operation we have experienced from the Cumbrian community has been truly outstanding.”

Leader of Cumbria County Council, Cllr Stewart Young added: “This has been a real joined up, multi-agency effort which has resulted in us coming together to share resources and expertise to help reach those who needed us most. Teams have worked tirelessly around the clock in very challenging conditions to deliver this essential support in communities in the north and east of our county.

“Cumbria has had its fair share of weather related incidents over the years, and it is always humbling to see local communities pulling together and supporting each other. I am also very proud of the hundreds of staff – from highways teams, gritter drivers, search and rescue, the Army, Royal Marines and RAF, Police and Fire officers – for the relentless effort to help Cumbria bounce back, to keep the county moving, and communities safe. Once again we have been shown that the famous Cumbrian spirit is alive and well.”

Those involved in the SCG included: