Cumbrian farmers call for a radical overhaul of agricultural policy

[W]ith less than two weeks left to respond to the Government’s consultation on the future for food, farming and the environment post Brexit, a new survey of UK farmers has revealed overwhelming support for a radical overhaul of agricultural policy. However, in spite of Secretary of State Michael Gove’s promises, many are concerned that the Government will fail to deliver on its promised reform.

The survey, undertaken earlier this month among members of the Nature Friendly Farming Network (NFFN), found that:

Martin Lines, chairman of the NFFN, who runs an arable family farm in Cambridgeshire, said: “For many of us farming is not just a job, it is a passion, and we have a duty of care to protect the landscape for future generations. Our members are issuing a clear call to action to government: act now to deliver radical change in agricultural policy.

“We cannot miss this significant opportunity to transform British agriculture in order to help farms evolve and thrive, whilst restoring and protecting our natural heritage.”

The consultation paper references the creation of a new environmental land management system that will become ‘the cornerstone of [English] agricultural policy’. When asked which factors are most critical in delivering an effective system, respondents ranked them as follows:

Almost all of the farmers surveyed (98%) called for a greater understanding of the critical role that farming plays in protecting the environment and delivering public goods. The NFFN is committed to securing farming policies that support wildlife, sustainable agriculture and fairness for farmers. The farmer-led network nominated which other public goods they believe need to be prioritised in policy post-Brexit:

NFFN will submit its response to the consultation next week. Martin concluded: “Brexit is a once in a lifetime opportunity to ensure British farmers have the systems and policies in place to grow affordable, healthy food whilst restoring biodiversity and reversing soil declines. The Nature Friendly Farming Network is urging all farmers to respond to the consultation ahead of the deadline of 8 May and ensure their voice is heard.” 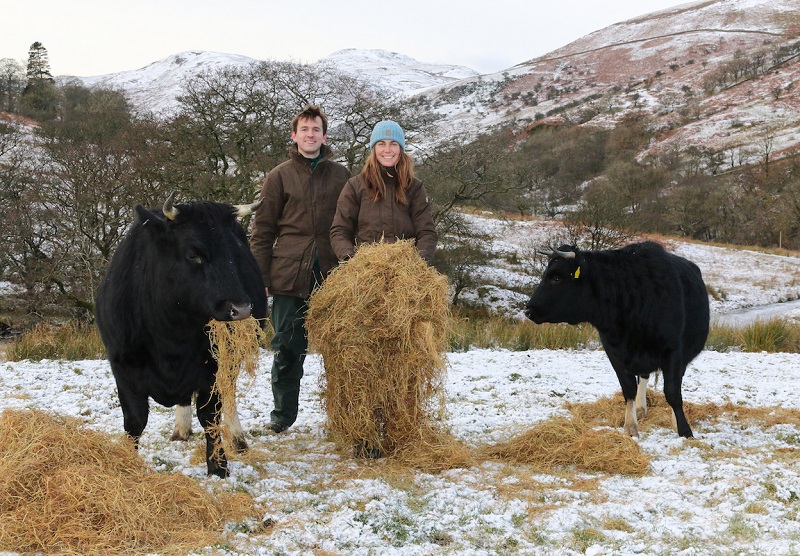 The Horned Beef Company Ltd was incorporated in 2015. Husband and wife team David and Bekka Corrie-Close are not from a farming background. Their passion for improving nature in the great British countryside, led them into a career in agriculture.

The Company’s farm holding extends to over 1000 acres. Landlords include The National Trust, RSPB and Cumbria Wildlife Trust, as well as other private individuals.

The Horned Beef Company is pioneering a new approach to the management of marginal land in Cumbria making farming and nature work together. The aim is to produce beef on grasslands which are unsuitable for crops. They also manage the land in order to provide homes for wildlife, allow water to flow naturally and captures carbon that benefits the climate. The farm uses innovative methods, such as using GPS collars to track cattle.

The Horned Beef Company also provides a grazing service to these conservation organisations, which require sensitive management of sites that are managed for biodiversity, water quality, flood alleviation and other ecosystem services. Some sites are designated SSSI (Site of Special Scientific Interest) and SAC (Special Area of Conservation).

BBC Countryfile filmed the farm in September 2017. Adam Henson was keen to tell the story of how David and Bekka currently operate their business without a traditional farmstead.

The business is run from its base in Lindale, near Grange-over-Sands in South Cumbria.

Why do you support nature friendly farming?

Farming with nature feels right to me. It looks right, it smells right, it sounds right. It’s no coincidence that produce from farms that work in harmony with nature tastes great too. I grew up in a town. The countryside was sacred to me as a boy. I’ve grown up to be an intrinsic part of it; to protect it. I’m now a farmer. I’m very worried about the future of our countryside.

However, I’m encouraged by what other farmers locally have to say about farming and nature. They’ve been through many more social and political changes in their long farming careers. But they fondly recount stories of years past when wildlife was abundant on their farms.

I’m part of the NFFN in the hope that it can help to start a dialogue between farmers, the public, and the policy makers about how we forge a truly sustainable way forward for UK agriculture.

What nature friendly farming approaches have you implemented on your farm?

The “farm” is quite unusual. It is a collection of sites, as small as a few acres and as large as 500, spread over a 30-mile wide area. I’m a new entrant, trying to get started in farming. I don’t own any land but have very quickly acquired a holding that extends to over 1000 acres. In the uplands and unimproved areas of the lowlands, landlords including the National Trust and private individuals want low intensity cattle grazing on their land. It is widely accepted that this extensive approach to farming these areas promotes the best outcomes for nature AND produces food.

Extensive grazing systems achieve relatively low outputs of livestock/meat. However, they can be operated with ultra low inputs. It’s still early days, but we are pioneering an approach that fine tunes the inputs/outputs of a traditional farming business whilst allowing the benefits of the extensive management to show themselves. Working with the National Trust, RSPB, Woodland Trust, Cumbria Farmer Network and others, we hope that we can better understand the complicated subject of ecosystem services and natural capital, working towards a system that rewards farmers for their role as land managers.

What impact has this had?

Land that we manage extensively with cattle often has a recent history of more intensive grazing by sheep and cattle. The immediate results are what could be described as untidy! But wildlife is flourishing. By that I mean long grass, seed heads, weeds (flowers).  Only long-term monitoring will provide evidence of the benefits of a more extensive approach.

What role do you see farmers playing in protecting nature?

Farmers know their land best. Given the right support, we will do a brilliant job of farming with nature. But we have to believe in it too. It’s not enough to set a prescriptive method for land management and reward us per acre. ALL farmers should be farming with nature and be able to access the support payments that help them to do so.

Why is Brexit an important opportunity for nature friendly farming?

Brexit provides a once in a lifetime opportunity to make a policy that protects and enhances our natural resources. This will achieve food security for the long term.

A policy that encourages some farmers to pursue a more intensive and unsustainable business model that will fail in the long run.

What’s the value of bringing farmers together in the NFFN?

The more of us that join the network, the more powerful the message that we want to see positive changes will be. It’s important that the public and government see farmers united in our efforts.