[R]oyal Air Force Spadeadam will receive the “Freedom of the City of Carlisle” on Saturday June 2nd 2018.

Carlisle City Council has cordially extended an invitation to RAF Spadeadam, in the centenary year of the Royal Air Force, to receive the Freedom of the City. A Flight of Royal Air Force Spadeadam personnel, headed by the Central Band of the Royal Air Force, and accompanied by the Queens Colours, will march off from the Castle to the City Centre at 11.25am, and at 12 o’clock, the city will be overflown by a Spitfire from the Battle of Britain Memorial Flight*.

The citation for the Freedom will be read out, and then the ceremony to officially hand over the scroll inferring the Honour will be presented to the JFACC.

RAF Spadeadam Station Commander, Wing commander Tim McAuley said: “In the centenary year of the formation of the Royal Air Force, receiving the Freedom of Carlisle is a great honour for Royal Air Force Spadeadam. We have very close links with the community in the region and across the North West, and this event further cements our ongoing relationship. The parade will be great opportunity to showcase the professionalism of Royal Air Force personnel.” 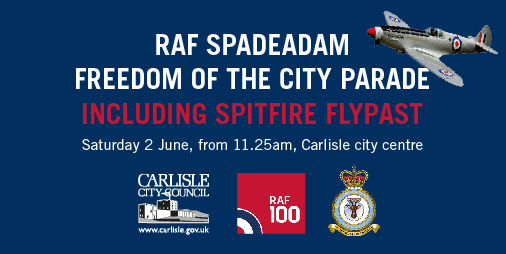 Anyone wishing to see the Parade is invited to line the route, which departs The Castle, passes along West Tower Street and approaches the city centre from Scotch Street.

A quadbike was stolen from a barn in Dean, near Workington, between 10pm yesterday and 8am today. Anyone with information...