Over £1,500 raised from The Wheelie Bin Challenge to support those touched by suicide in Cumbria 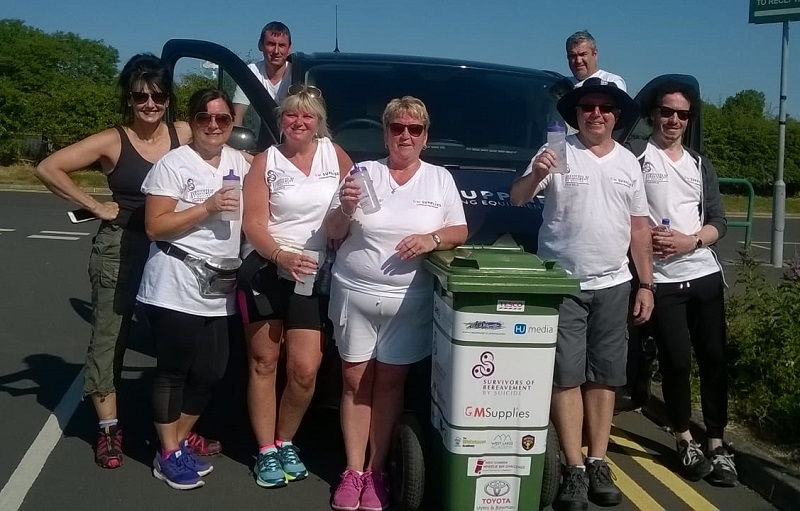 [O]n Friday (29 June), Rosina Robinson and her team braved the scorching heat in a gruelling 20-mile walk across West Cumbria.

The walk, stretching from Egremont to Workington, was a local initiative named The Wheelie Bin Challenge, an event in which participants walk across West Cumbria pushing wheelie bins in an attempt to raise funds and awareness for local foodbanks and charities. The team of 14 walkers – made up of Rosina’s family, friends and Survivors of Bereavement by Suicide (SOBS) volunteers – chose to support SOBS Cumbria, as each of them had been affected by suicide. Others joined them along the way to offer their support.

Each year, more than 6,000 people take their own lives across the UK: SOBS is a national charity which works to provide emotional support to those who have been left behind. SOBS Cumbria support groups meet once a month, with groups in North, South and West Cumbria. SOBS Cumbria also has a local 24/7 helpline and a closed Facebook group.

The Wheelie Bin Challenge had been testing, but enjoyable. “It went very well. We set off fine, but we soon realised that the heat would be an issue. Soon, even walking up small slopes became difficult; quite a few people suffered with blistering. It was hot and sticky!” Rosina recalled, referring to the 28°C heat that hit West Cumbria over the weekend.

The walk began at 8am and came to a close at 5pm. “We were happy that we’d finished. Everyone was in good spirits and we’d all gotten to know each other well along the way. By the end of it, we felt like we’d all been friends for a long time and we all had a little hug at the end. I think there was a great sense of achievement for the whole team, even if our feet were sore!”

John Brown, founder of SOBS Cumbria, was delighted with the team’s dedication. “I absolutely take my hat off to Rosina and the rest of the team who walked 20 miles in sweltering heat to raise funds for SOBS Cumbria. It was a truly fantastic effort.”

Rosina is proud of the funds the team has raised. “One of our main purposes for doing the Challenge was to promote SOBS and encourage people to talk about the challenges of suicide bereavement. I think we’ve done really well to raise the amount we have; we’ve achieved what we set out to do, but people can still donate.”

GM Supplies kindly provided the team with t-shirts; it allowed its van to be used as a support vehicle and to take the food collected to the storage depot. GM Supplies also generously donated £500 to the team’s fundraising efforts.

The team has raised over £1,500 so far and, although the walk is over, donations remain open. If you’d like to support the team’s fundraising campaign, visit SOBS Cumbria’s BT MyDonate donation page. Alternatively, you can choose a different method of donation here.