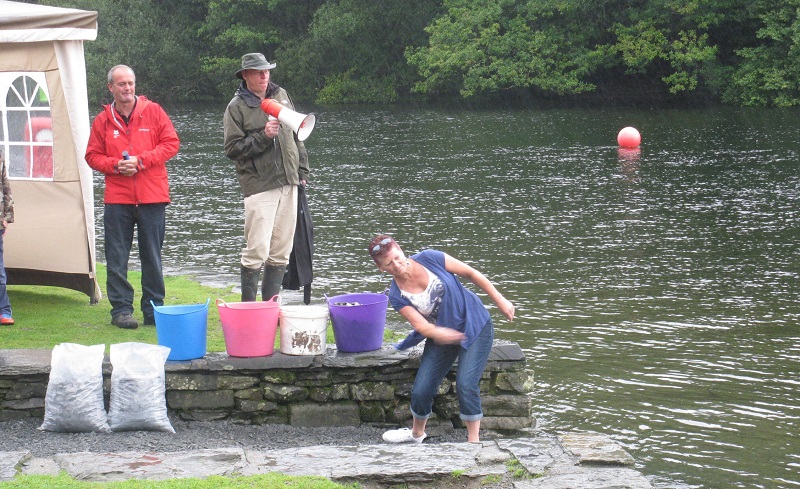 [A]nniversaries will be a major theme at this year’s All England Open Stone Skimming Championships, as the hugely popular event celebrates a huge milestone – its 10th birthday – but does so whilst remembering and commemorating the part that stone skimming played in the Dambusters Raid, which has its 75th anniversary this year.

The official English stone skimming event was founded in 2008 as a means of raising vital funds for conservation in the South Lakes. The event was the brainchild of South Cumbria Rivers Trust (SCRT) – a charity that seeks to maintain and improve the health of rivers in the southern Lake District, part of England’s newest World Heritage Site (designated in 2017).

SCRT recognised that stone skimming on open water is something few adults and children can resist, with the satisfaction that comes from seeing a stone bounce across the surface of the water being second to none.

It also saw that bettering one’s last effort can become an obsession, so if it organised a championship in which competitors would pay to throw a set number of stones, the likelihood would be that a competitor would want more goes at the challenge, thus raising more for the charity pot.

This same obsession was something that had gripped British engineer Barnes Wallis during his youth.  As children, he and his sister Annie would skim stones, with Barnes’s typically skipping 9 to 11 times and hers just plopping in the water.

By the time World War II came around, and Britain was having to play catch-up to try to fend off Hitler’s troops, Barnes Wallis was in a position to influence the war’s strategy.  A key goal was to destroy Germany’s hydro-electric dams and also the German ship Tirpitz, the flagship of Hitler’s fleet, which was anchored in the Norwegian fjords.

In March 1942, Barnes Wallis drew on his knowledge of stone skimming to conceive an idea of how the dams could be destroyed, despite having torpedo nets to protect them. After adapting his stone skimming technique, to include a spherical object, rather than a flat stone, he produced his ‘Spherical Bomb – Surface Torpedo’ paper of April 1942.

This was initially dismissed as being “tripe of the widest description” by Sir Arthur Harris, the Chief of Bomber Command, who added, “there is not the slightest chance of it working.” Unperturbed, Barnes Wallis persisted with his theory of how a bomb could bounce across the water, in a calculated manner, and destroy its intended targets.  He examined how backspin could allow a spherical bomb to bounce across the water approaching the dams’ walls and then stay close to the wall, causing a massive underwater explosion that could destroy it.

Once the plan was adopted, training had to take place and, fittingly, the RAF’s 617 Squadron did that in the Lake District, using Derwent Dam as one centre of tests and preparations for its Lancaster Bombers, as well as using Ladybower reservoir in the Peak District.  Six long weeks of trials took place, much to the annoyance of local residents, who blamed the noise of the low-flying aircraft for a fall in milk yield, a loss of eggs, as their hens stopped laying, falling roof tiles and much more.

On May 16 and May 17, 1943, the 617 Squadron, under the command of 24-year-old Wing Commander Guy Gibson and with aircrew drawn from the British RAF, the Canadian RCAF, the Australian RAAF and the New Zealand RNZAF, plus one American serving in the RCAF, carried out ‘Operation Chastise’, colloquially known thereafter as the Dambusters Raid.

Flying at 232 mph by moonlight and at an altitude of just 60 feet approaching the German dams in the Ruhr valley – the industrial heartland of Hitler’s Germany – the crews, with an average age of men in their early 20s, dropped their bouncing bombs, each of a 4-ton weight, with two-thirds of this being explosives.  Dropping the bombs at the exact pre-determined height, speed and direction was crucial, to ensure the accuracy required in the direction of the spin and the desired backspin of 500 revolutions per minute.

This huge act of bravery led to both the Möhne and Edersee dams being breached and the Sorpe dam damaged.  Eight bridges were also damaged and 25 were destroyed. Two hydro-electric power stations were destroyed, along with 12 factories. A further 92 factories were damaged.

This was not without severe loss of life. The RAF sent out 133 men and 53 were killed, with a further three taken prisoner.  Eight aircraft were lost and three had to turn back.  Some planes hit power lines and others were downed by flak.  Around 1294 people on the ground were also killed, many of whom were in a forced labour camp.  These facts troubled Barnes Wallis for the rest of his life.

Without the raid, however, Britain may not have won the war.  The operation gave a huge boost to morale back at home and led to thousands of workers from Germany’s Atlantic operation having to be redeployed to carry out rebuilding projects.  Guy Gibson received the Victoria Cross and 33 other aircrew members were decorated for their bravery.

In 1944, the same bouncing bomb, inspired by stone skimming, took out the Tirpitz, this again being a major gain in the war effort against Nazi Germany.

The All England Stone Skimming Championships will this year continue to raise money for conservation in the South Lakes, in their usual way via entrance fees, but shall also do something unique, to mark both their 10th anniversary and the Dambuster Raid’s 75th.  As the traditional gift for a tenth anniversary is tin, the organisers will also have collection tins into which visitors to the championships and competitors can make voluntary donations that will go towards the preservation of the Bomber Command Memorial.  Details of this can be found HERE.

Speaking on behalf of the Championships organisers, Julius Barratt, says: “It seemed fitting to celebrate our anniversary by recognising the part that stone skimming has played not just in most of our childhoods, but in British history in the 20th century.  We all owe a debt of gratitude to the aircrews of Bomber Command, without whose bravery 75 years ago, we may well not have had the freedom to enjoy simple pleasures such as stone skimming.  We shall be delighted if people coming along to this year’s event will spare a little cash for the Bomber Command memorial fund.”

This year’s championships, on Saturday August 18, will start as usual at 11am and finish at 4pm.  The venue is that of National Trust Fell Foot Park, at the foot of Windermere – England’s biggest lake.  There will be official English records up for grabs in the Men’s, Women’s, Children (11-16) and Children (Under 11) categories and the winners will be those who skim the stone that travels the furthest distance, after a minimum of three skips on the water, keeping within the lane marked out on the lake.

Entry is open to anyone wishing to have a go and costs £3 for an adult, £2 for a child aged 11-16 and £1 for younger children.  This will give each competitor three stones, which they can choose from a bucket provided by the organisers, effectively giving each person three attempts.  Entrants may enter, on this basis, as many times as they wish.

The current record in the men’s event was set last year by newcomer, Gareth Twamley, who skimmed a distance of 88 metres.  This distance is less than that achieved at other skimming events, but has much to do with conditions on Windermere, which can get choppy, if there is a breeze, or a passing boat.  The women’s record stands at 50 metres (Barbara Maher).

Visitors will find a barbecue and a beer tent marquee courtesy of sponsor Bowness Brewery.  All can enjoy activities organised by National Trust Rangers, many of which have a suitable stone-focused theme.  The event is also supported by sponsor, the Lakeside Hotel.

More information can be found at https://www.facebook.com/SouthCumbriaRiversTrust/