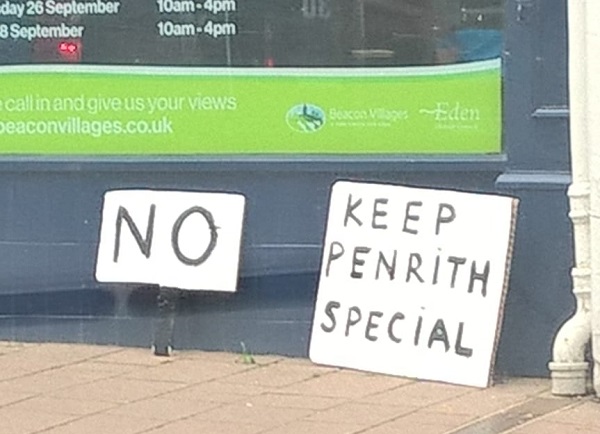 The Masterplan envisages doubling the population of Penrith by building three new ‘Garden villages’ behind the Beacon and putting a development on Beacon Hill itself.

On Monday 10th Eden District Council launched their Masterplan for Penrith and Eden. This was reported in the Herald on Saturday 8th.

On Sunday 9th a group of concerned local residents met and decided to launch a campaign against the Council plan. This group called Keep Penrith Special has launched an online petition addressed to Eden District Council asking the Council to reject the Masterplan.

The group believes the Masterplan, which would double the size of Penrith, will cause more problems than it solves.

The petition has been signed by more than 350 people since it went live late on Sunday night and more are signing every hour.

The text of the petition reads as follows:

Why this is important:

Penrith and the Eden Valley is special. We know that. It’s a great place to live.

Eden District has the lowest population density of any district in England. Let’s keep it that way.

Doubling the population of Penrith will change it for ever.

We don’t want to double the population resulting in:

More congestion (particularly in the north down to Fair Hill and east into Kemplay).

More pressure on your local NHS.

More pressure on the best schools.

Major roads on each side of Penrith.

The Beacon scarred with major roads and development.

The Beacon is special – it shouldn’t be built on.

We need more affordable housing for locals, but we don’t need 5,560 houses to do that.

Your own local developments elsewhere in Eden will be rejected as the Council will say this ‘meets the need’.

The plan never explains where any new jobs will come from.

It’s a daft place to build a huge new settlement. It’s on really high ground. The signs on roads leading there already say, ‘Winter conditions can be hazardous.’ There are far better sites in the area for smaller developments in the many local communities.

All the roads down from the Beacon into Penrith will be far steeper than is ever recommended for roads leading to such a development. The access will be dangerous and add congestion to Kemplay roundabout, Fair Hill, Kemplay and the whole northern part of Penrith.

The Masterplan makes clear that the idea of a Northern Relief Road isn’t dead. This would scar the Eden Valley for ever. It would also put a six lane road within a third of a mile of these new houses.

As most traffic will have to exit from this development at J41 of the M6, we doubt much trade will actually come to Penrith’s shops; people will go to Carlisle instead.

Let’s keep Penrith and Eden special, a place for local people, and reject a plan which will just make money for a few.

Tatiana Harrison, who set up the group with Adrian and Belinda Hill, John Harris and Matt Baxter, said: “We are hugely encouraged by the fantastic response to the launch of our campaign.

“Please keep signing and ask your friends and neighbours to do the same. The petition can be found at https://you.38degrees.org.uk/petitions/keep-penrith-special-reject-the-penrith-masterplan.

“We are conducting an online and offline campaign against the Masterplan. Penrith and the Eden district deserve better than this. We need a plan based upon the feedback and thoughts of the people of Penrith and Eden to improve the town of Penrith itself. That should be the priority rather than building a vast number of new houses two and a half miles away from the centre of town.

“We want to work with local people to create an alternative vision, which addresses their real concerns and aspirations. If you would like to help with our campaign or further information, please email us at mail@keeppenrithspecial.org.

Proposals contained in the Masterplan for how Penrith might grow up to 2050 include:

The Pop Up Shop will be open at the following time during September 2018:

If community groups, schools or colleges would like to pre-book a visit to the Pop Up Shop in September please contact Eden District Council’s Planning Policy Team on 01768 817817 or email: penrithmasterplan@eden.gov.uk

A series of public engagement events are also being planned across Eden District in September and October. The dates will be made available online at www.beaconvillages.co.uk via social media and in the local press. The ones scheduled so far include: