A group of Design & Technology students from St Benedict’s School have produced a spectacular display to mark 100 years since the end of the First World War.

Over the past few weeks all Years 7, 8 and 9 students have been making individual poppies, by carving them out of acrylic.

Each poppy has the name of a soldier from Whitehaven who lost their life during World War One engraved onto it, along with the students’ initials and a message or image to help personalise their poppy. 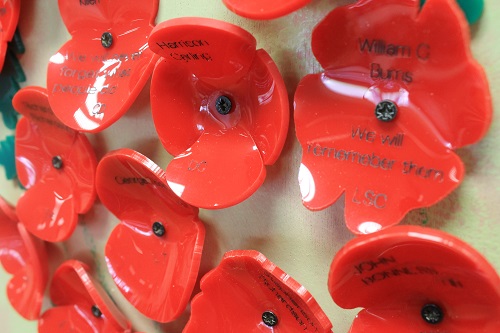 Students were given a choice of six different poppy shapes, and they then had to research into the names of the soldiers from Whitehaven.

Students then personalised their poppies by adding their chosen soldiers name, their own initial and either an image or message to make each poppy unique. The poppies were cut out on the laser cutter before students heated and shaped their poppy to make them look more realistic.

The poppies have been arranged onto three boards to make the number 100, which is to mark the 100th anniversary of the end of the First World War.

These boards are now on display in the main school hall, to be seen throughout this week’s special Remembrance Assemblies.

Mrs Collins, Subject Leader for Engineering Technology is extremely proud of the work that’s been produced: “As this year marks the 100 year anniversary since the end of the World War 1, we felt it was important that students were given an opportunity to remember the sacrifices that were made by so many. Students approached the project in an extremely positive and enthusiastic way. The end result is something we are all really proud of.”

The boards will be kept on display for the remainder of November, and then hopefully donated to an appropriate organisation or charity.