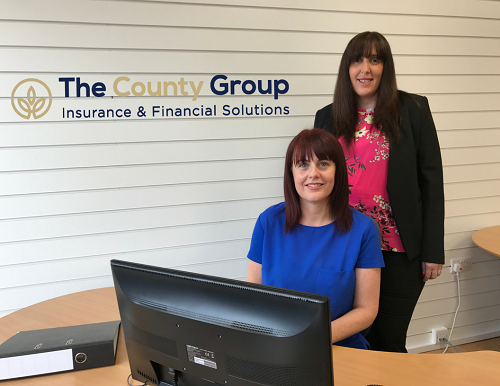 A LEADING insurance firm’s first ever Cumbrian office has enjoyed rapid growth in its opening year and is celebrating by giving something back to its community.

The County Group opened its Workington branch on Jane Street without a single client on its books but after recently marking its first 12 months in business now boasts a 600-strong customer base.

The branch was keen to give something back to the community it serves so has chosen to support the charity Age UK West Cumbria, which helps older people, their families and carers.

One of the UK’s largest insurance brokers, The County Group offers both personal and business products and has annual client’s premiums of more than £70m.

The firm, which has its headquarters in Crewe, employs 270 staff across more than 25 offices.

Workington Branch Manager Karen Gibson said: “We’ve been in over 12 months now and we’ve just gone from strength to strength.

“It’s been getting busier month by month. We’ve been writing on average up to 40 policies a month.

“We must have about 600 clients at the moment. When we first started we had none. It’s really taking off.

“We’ve started supporting Age UK West Cumbria by giving them 25% of the commission we make on a policy.

“There are a lot of elderly people in the town and surrounding areas, and it’s a fantastic charity to support.”

Karen and her branch colleague Lea Blackwell previously worked together at another local broker and the pair knew there remained a demand for a shop counter service, so approached The County Group about the possibility of opening up a branch in Workington.

Karen said “I got in touch with The County Group’s Chief Executive Dave Clapp to see if he’d be interested in opening an office in the town.

“They saw the potential and now here we are. There is still a big demand for a face-to-face service.

“There are a lot of surrounding towns and villages where elderly people don’t want to do their insurance online or over the phone, they like a personal service.”

Karen and Lea are both popular figures in their local community having provided crucial support to many residents during the devastating floods in Cumbria back in 2015.

Karen believes many people prefer a face-to-face service due to bad experiences they had during the aftermath of the floods.

She explained: “I have previously worked with many customers who were making big claims. A lot said they could not have done it without us. We even had people not insured with us coming in asking for help because they’d had problems with insurance they’d done online.”

The County Group offer a free no-obligation review of your insurance, please pop into the branch on Jane Street or call Karen on 01900 511828 or visit www.countyins.com