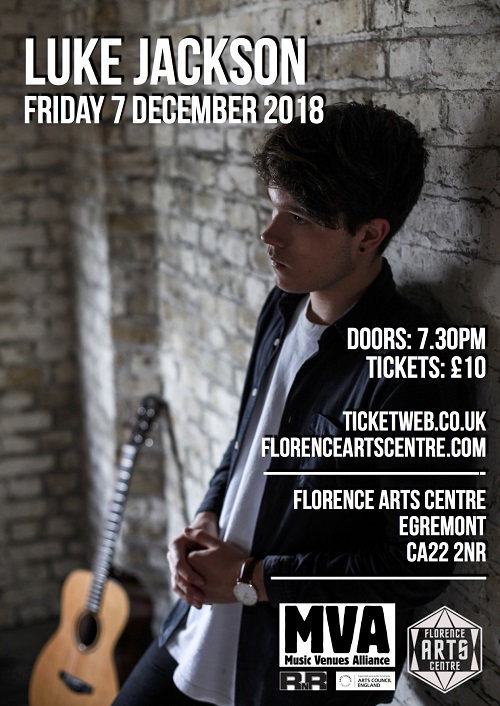 Ever-present on the UK music scene, Luke Jackson makes a welcome return to Cumbria this month, playing an intimate solo gig at Florence Arts Centre in Egremont on Friday 7 December.

No stranger to the county, having played at both the Ireby Folk Festival and at Carlisle’s Folk & Blues Club in the past, as well as a previous appearance at Florence Arts in 2016 – Luke is steadily developing a reputation as one of the UK’s brightest and best songwriting talents.

As a youngster, way back in 2013, Luke was nominated for his first two BBC Radio 2 Folk Awards: the Horizon Award for Emerging Talent and a nomination in the Young Folk category. Since then he has won FATEA’s Male Artist of the Year Award, twice and has been a familiar face on the touring circuit in there UK and across Europe with his own brand of contemporary folk, with his feet firmly in the now.

His recent work includes touring and recording with Amy Wadge, the Grammy Award-winning songwriter of Ed Sheeran’s Thinking Out Loud, and tours with the likes of Greg Russell and Ciaran Algar, and Rebecca Loebe. His latest album, Solo : Duo : Trio, released earlier this year, combines tracks from his four previous studio albums recorded live at venues across the UK, with plaudits from critics and fellow musicians alike. Legendary songwriter Mike Harding commented, “That’s got to be one of the most faultless live recordings ever in my opinion – he’s a great songwriter with a great voice and boy can he sing the blues”.

This will be a night of superb live music, with tracks from across Luke’s four studio albums and some new material in the mix. A skilful songwriter with a powerful and expressive voice, make sure you see him playing in one of the region’s most surprising and intimate venues.

Tickets costs £10 and are available now from the venue’s website, via Ticketweb.co.uk or in person at the box office (open Wednesday to Sunday, 11am to 4pm).