A CARLISLE man who had a banned stun gun disguised as a torch hidden away in his bedroom has been jailed for five years.

Michael John Kenney, 27, was sentenced at the city’s crown court this afternoon (WED).

At a previous hearing he had admitted possessing a disguised firearm without proper authority – an offence which triggered a minimum five-year jail term due to the item being classed as a prohibited weapon.

The Fox-810 electronic stun device was discovered in a safe in Kenney’s bedroom on January 25 by police as they executed a warrant at his home.

Forensic testing concluded the device was not operational, even after batteries had been charged.

Kenney – a man with a lengthy criminal record – was said to have bought the banned item for £50 for “self-defence”. The court heard he had spoken of owing a £20,000 debt to “dangerous criminals”.

“He knew it was a weapon and what was it was designed for, and kept it as such,” said Judge Adkin. 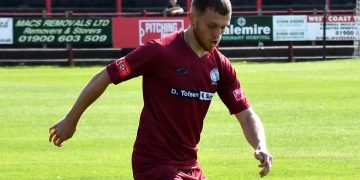 A fifth straight win in the League kept Workington clear at the top of the NPL West table.