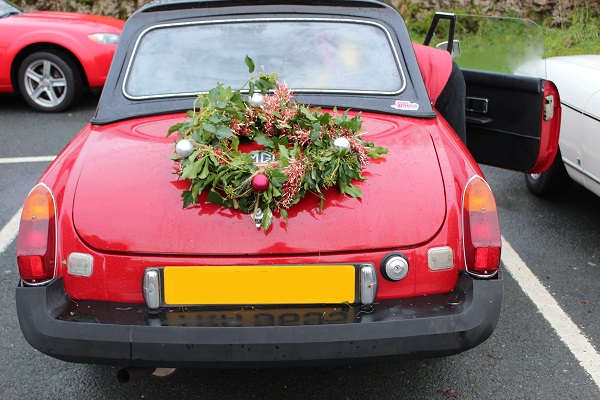 The Famous Christmas Cracker Run has been running for more than twenty years and is run by MG Cumbria and is a unique event in that it takes place in December, long after most classic car events have finished for the season.

As usual the event started on December 2nd at Rheged where more than fifty cars from all over the country arrived on a slightly damp morning for documentation and coffee. Owners ar encouraged to decorate their cars and dress up in a festive manner for the event so there were plenty of Santas, angels, pixies and even Mary and Joseph taking part!

The cars set off at minute intervals in order of age, oldest first. The oldest car being the 1936 Morris 8 of . The route headed north via Newbiggin and Skelton to Sowerby Row and over to Caldbeck where the first route control was. Here the marshals asked the crews to identify six well known motorsport personalities.

The next section of the route should have been scenic, but the mist did not help the view as the cars went over Caldbeck Fell and down to Boltongate and then up the spectacular Catlands Hill to Ireby and Uldale. From there the cars went down to Castle Inn and along side Bass Lake to the next control point at Peil Wyke. Here the competitors had to identify six classic cars – with varying success.

The final section of the routed to Lorton and Buttermere by the back roads and then over Newlands Hawse to Braithwate and the finish at the Braithwaite institute Hall where a two-course lunch and coffee were served while the results were calculated. The awards were presented, and the crews then headed for the Keswick Victorian Christmas Fayre.

The furthest ravelled award went to George McClelland, the Motorsport Personalities quiz was won by John Ross and the Classic Car quiz by Brian Bradley.

The best decorated car was the Mercedes of Phil Daniel and the best dressed crew that of Rhona Mackinnon.

The overall winner was Peter Keen.