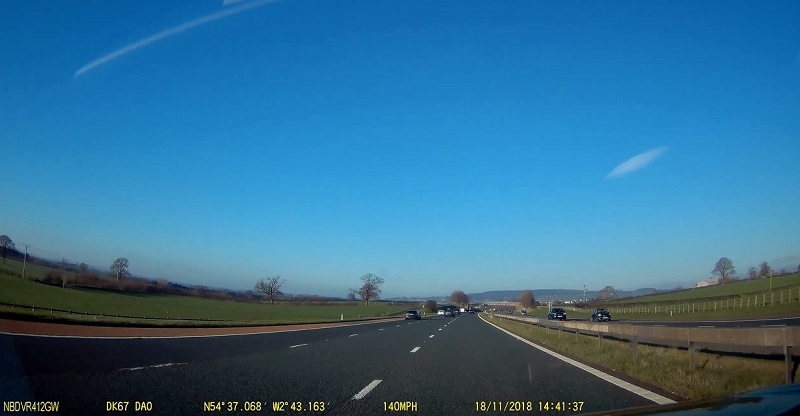 A man who was recorded at speeds of up to 140mph on the M6 in Cumbria has been banned from driving for 20 months and must take an extended re-test.

Lee Tyson, 36, of Basket Road, Whitehaven, admitted a charge of dangerous driving after he passed an unmarked police car in his BMW 5 Series on the M6 northbound at Tebay driving at around 100mph on Sunday 18 November, 2018.

Tyson was then seen to accelerate to 130mph as he passed Junction 39.

At one point he passed through roadworks which included a closure of one lane and an advisory 50mph speed limit in excess of 100mph.

Tyson was stopped at Clifton after hitting speeds of 140mph. Four passengers were in the car – one only nine-months old.

In his police interview, Tyson could offer no reason why he was driving as fast as he was.

At court Tyson admitted dangerous driving. On 5 February he was sentenced at Carlisle Magistrates’ Court to 12-weeks in prison suspended for a year and banned from driving for 20 months. He must sit an extended re-test before he can get behind the wheel. Tyson must also complete 150 hours of community service.

Sergeant Claire Sampson said: “The manner of driving not only put members of the public at risk but his own family.

“To find he had had passengers in the car including a nine-month old was difficult to comprehend. Fortunately Tyson was stopped before his manner of driving caused a collision which would almost certainly have resulted in loss of life.

“The Constabulary welcomes the driving ban issued to Tyson, alongside the caveat that he must complete an extended re-test to earn back his right to get behind the wheel.”