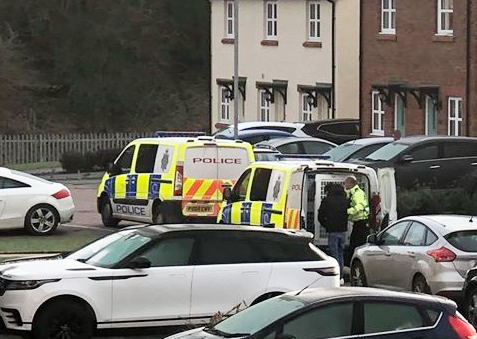 TWO people were arrested in a village near Penrith as part of a police investigation into alleged modern slavery offences.

Onlookers were left “shocked” after seeing a hive of police activity outside a detached house at Jacobite Gardens, Clifton, as part of what one called a “dawn raid” on Friday morning.

One eyewitness, who asked not to be identified, said: “I just saw lots of police pulling on to the estate early in the morning, which is unusual. There was a lot of activity going on.”

That witness reported seeing several police vehicles and a crime scene investigation van. Photographs were taken during an apparently painstaking probe which appeared to focus both on the house itself and also a vehicle, which was taken away from the property.

The witness said: “I have never seen so many police turn up at one house or at a single incident. It was shocking. There were a lot of people wondering what was going on.”

The witness spoke of “very rarely” seeing occupants of the house, situated on a recently-built and plush development known as The Oaks at the southern end of Clifton, saying: They kept themselves to themselves. It was very strange because the curtains were always drawn upstairs.”

A Cumbria police spokesman said: “Officers on Friday arrested two Vietnamese nationals – a man in his 20s and a woman in her 30s – at an address in Clifton.

“The arrests were part of an investigation into ongoing modern day slavery offences. Both have been bailed pending further enquiries.”

The spokesman added: “Two further people were arrested on suspicion of having entered the country illegally.

“They were transferred into the care of immigration officials.”

Immigration checks revealed that two Vietnamese men, aged 20 and 28, had no permission to be in the UK. The 20-year-old had entered the country illegally and the 28-year-old had overstayed his visa. Both men were detained while steps are taken to remove them from the UK.”