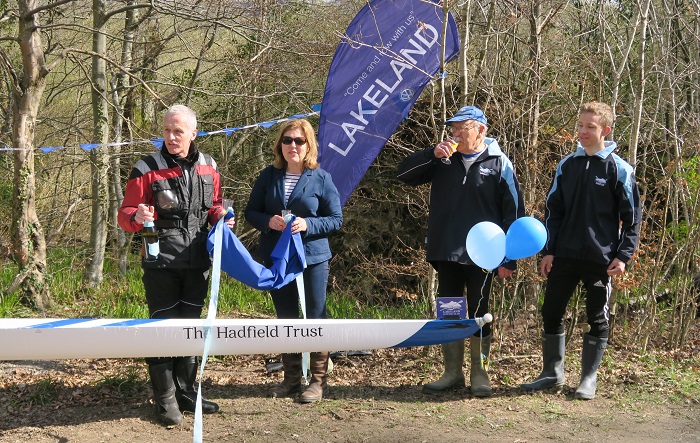 There was great excitement at Derwentwater-based Lakeland Rowing Club on Saturday when it launched a new single sculling boat funded by charity The Hadfield Trust.

The scull was taken for its inaugural outing on the lake by junior member Adam Wilson. The Keswick School student, who learned to row with the club, is planning to use it when he competes in his first ever race, at the Scottish Rowing Spring Regatta at Strathclyde Park, on 27-28 April.

Twelve-year-old Lakeland RC, which is also a registered charity, was the first rowing club to be established in the Lake District and has introduced local people aged from 13 to 70-plus to the sociable, low-impact sport.

Since 2014, it has quadrupled its membership to almost 90 adults and juniors and it has a waiting list for its learn-to-row courses at both levels.

The club’s development officer, David Thomas, said: “We are thrilled with the latest addition to our fleet, which we have named Hadfield Trust in recognition of its very generous support.

“The club’s rapid growth in recent years has put increasing pressure on our limited fleet, and this splendid new boat boat will allow more of our members to progress their skills and to compete in regional and national events.”

In 2018, having outgrown its original base at Derwentwater Marina, Lakeland RC relocated to a new site on Keswick Isthmus, leased from the National Trust. The move has enabled it to offer increased year-round rowing opportunities.

David added: “Lakeland has introduced more than 100 school students to the sport. The new boat will be used by students from Keswick and Cockermouth schools, as well as our senior and Masters rowers.

“Rowing is one of Great Britain’s most successful sports at Olympic level. Who knows, maybe the next James Cracknell will come from Lakeland RC and Keswick School?”

Andrew Forsyth and Caroline Addison, trustees of The Hadfield Trust, were on hand to unveil the named prow of the new craft.  Anointing the hull with Prosecco, Andrew commented “on the infectious enthusiasm within the club for both the club and their chosen sport and that the team had clearly gained that useful critical mass of numbers and skills.  This means that goals can be achieved so much more easily and he expected the Club to fully realise their ambitious plans for the future”.

Last weekend, Lakeland hosted a highly successful joint training camp on Derwentwater with Durham Amateur Rowing Club. It was attended by 13 new single scullers, many of whom will progress to competing in regattas during the summer months, including the British and Henley Masters.

Beginners, or returning rowers, who would like to know more about opportunities at Lakeland RC can visit www.lakelandrowingclub.com or find it on Facebook – just search for the Lakeland Rowing Club page.

The Hadfield Trust seeks to fund charitable organisations working within Cumbria and has identified priorities of social needs, youth and employment, help for older people, the arts and the environment.   With the Lakeland RC’s 60+ years’ age span of its rowers, the Trustees could see that the Club is clearly reaching all ages and with its growing fleet of club boats is able to nurture greater numbers of converts to the sport.