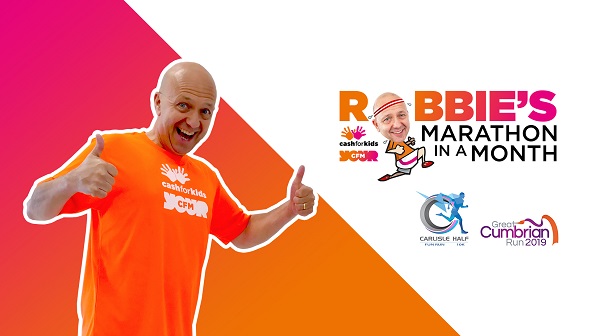 It’s his biggest physical and mental challenge to date, and he’s doing it all to raise money and support local disadvantaged and disabled children.

CFM’s Breakfast Presenter Robbie Dee who has lived in the area for 17 years will take on the two local half marathons the Great Cumbrian Run and Carlisle Half, later this year which will see him run a total of 26.2 Cumbrian miles and hopefully raise thousands of pounds to support CFM’s official charity Cash for Kids.

It’s the first time Robbie has attempted to run such a long distance within a set time, with both events being held just one month apart from each other. However, he hopes that he won’t be running it alone as he opens up the invitation to everyone in the area…to complete the marathon (or half) in a month with him!

The first event and newest half marathon to the area, the Carlisle Half, will take place on Sunday 1st September which sets off and ends at the Carlisle United grounds of Brunton Park.

Event Director Ian Milburn commented “We are delighted to be part of Robbie’s Marathon in a Month and we would like to encourage as many runners as possible to take part in this amazing challenge. Robbie’s Runners will be a major part of our event, this year, and our fast route, with full road closures and entertainment at strategic parts of the route, will make it enjoyable for competitors of all abilities”

Just a month later, the longest standing and well established half marathon event, the Great Cumbrian Run will take place on Sunday 8th October commencing from The Sheepmount Stadium.

Events Manager Niall Sanderson added “Cash for Kids has been a huge part of The Great Cumbrian Run for a number of years, as an official partner charity, and it is fantastic for Robbie Dee and his army of runners to be taking part in 2019. The route really is breath taking, leaving The Sheepmount Stadium and passing the castle before heading through the city centre and out into the countryside; It’s a real celebration of everything ‘Great Cumbrian’. Give it a go, it’s a real opportunity to impact on the lives of local disadvantaged and disabled children.”

Robbie is inviting people, 18 and over, who are up for a challenge this year to complete either one or both of the events with him. Supported by both event organisers this year, Cash for Kids are able to offer runners the exclusive discount which permits entry to either event for just £20, or entry to both events for £40. By signing up to run with Robbie, runners will need to raise a minimum of just £50 for the charity and will receive their very own ‘Marathon in a Month’ running t-shirt for the event.

CFM’s Robbie Dee explained “As a dad I’m very lucky, I have two beautiful children who are healthy and have a good life, not all children are this lucky for many different reasons and our brilliant charity Cash for Kids helps as many children in this situation as we can. If I can do it you can, you don’t have to be an athlete this is about you and I, running to raise money for a fantastic LOCAL charity and every penny raised in our area stays in our area. Maybe you just want to get fitter, set yourself a personal target, have often thought about doing it but haven’t yet, whatever your reason come with me on ONE of these events OR BOTH and let’s see how much money we can raise for a great local cause! Believe me it’s an amazing feeling as you cross that finish line and knowing you’ve done your bit to help local children “

All funds raised through Robbie’s Marathon in a Month will go to Cash for Kids, which is distributed in the CFM area to support the 1 in 4 children living in Cumbria and South West Scotland who are disabled, disadvantaged or need additional learning support, with one hundred percent of donations staying local.

Join Robbie’s Marathon in a Month to get involved and sign up at cfmradio.co.uk/marathon