Over 80 Teddy Bears have successfully stormed Muncaster Castle and are now enjoying living there along with the slightly bearwildered Pennington Family, who have previously held the Castle on their own for well over 800 years.

To celebrate their (mostly amicable) joint occupation of the Castle, the Bears and Pennington family have launched a BearGanza to highlight how they aim to live harmoniously together in the future.

BearGanza was officially opened by the Fool of Muncaster with the help of the pupils of Waberthwaite School on 2nd July in front of a crowd of eagerly waiting Teddy Bear fans!

BearGanza shows the Bears enjoying their luxurious new accommodation as they lounge around the ornate Drawing Room in Muncaster Castle for the month of July. No doubt in the future the Bears will decide they wish to use more of the posh rooms as well, exiling the Pennington family, as far as possible, to be contained “Below Stairs” where they now belong! 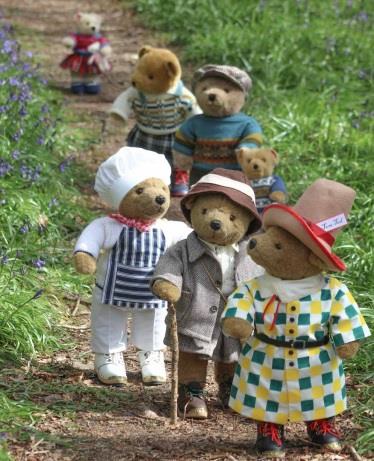 The Muncaster Teddy Bears are a collection of 80+ Lakeland Bears that were lovingly created by husband and wife John and Wendy Phillips in the 1980s and 1990s. Each fully jointed bear has its own personality and are dressed in their own unique handmade outfit.

Muncaster was home to real life Himalayan Moon Bears in the 1970 and 80s. The Lakeland Bears could not wait to move to Muncaster and in April 2019 they became the Castle’s newest residents.

Peter Frost-Pennington, who has lived at Muncaster quite happily for the last 25 years without a teddy bear said: “We are thrilled to have bears at Muncaster once again, but glad that this time they are a bit smaller and are mostly Castle trained! Mind you it is a bit disconcerting to find them popping up all over the house and often in places where you least expect them. Quite a takeover bid, I must say!”

The BearGanza will be open for the whole of July 2019 with special Teddy Bear themed events running alongside it.

Thunderstorms and heavy showers are predicted for tomorrow and Wednesday, leading the Met Office to issue a yellow weather warning