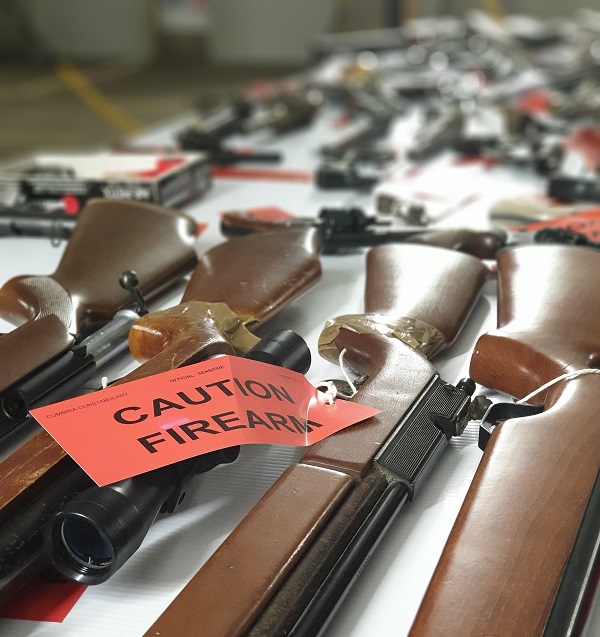 Cumbria Constabulary received 112 weapons from members of the public during a fortnight-long surrender period.

The surrender, which ran between 20th July and 4th August 2019, was part of a national firearms initiative coordinated by the National Ballistic Intelligence Service (NABIS) who offer forensic, tactical and strategic intelligence to tackle all aspects of firearms related crime.

Forces appealed to the public to hand in as many unlicensed or unwanted firearms to ensure that they do not fall into the hands of criminals.

During the surrender those handing over weapons would not face prosecution for the illegal possession at the point of surrender.

Weapons handed in during the surrender period are:

Superintendent Andrew Wilkinson said: “This has been a successful operation with many dangerous weapons handed in from members of the public and now out of the reach of criminals.

“Many of these weapons were simply sitting in houses unused, some were antiques or trophies of war that have been passed down through generations. The danger of these weapons is that they could fall into the hands of a criminal which could cause serious or fatal injury.

“I’d like to thank those who have handed in weapons in during the surrender as you have contributed to making Cumbria a safer place.

“If you’re worried about the existence of a firearm or need advice, please contact police or report anonymously via Crimestoppers.”

Peter McCall, Cumbria’s Police and Crime Commissioner, said: “I’m pleased to see residents handing in unlicensed and unused firearms so that they can be handled appropriately.

“Organised and gang crime does take place in Cumbria and the public taking part in this type of operation helps reduce the risk of weapons falling in to the wrong hands and possibly taking someone’s life.

“I would like to thank all members of the public who made the decision to come forward – you’ve helped make Cumbria even safer.”

If you have a specific enquiry relating to firearms licensing please visit: https://www.cumbria.police.uk/Apply-For-It/Firearms/Firearms-Licensing.aspx.