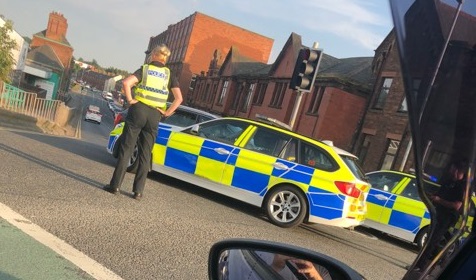 A MAN has admitted dangerous driving following a police chase in Carlisle.

Matthew Adam Neale, 43, pleaded guilty to two offences when he appeared at the city’s crown court this morning (FRI).

Neale admitted driving an Audi A4 dangerously on London Road in Carlisle. This charge is said to arise out of a police pursuit – captured on dash cam, the court heard – on the evening of Monday, 15th July.

During a short hearing in front of Judge David Potter, Neale also admitted having driven the same vehicle without due care and attention during an earlier incident, at around 7-35pm that evening at Warwick Road in the city, which had sparked a police response.

A Cumbria Constabulary spokesman said after the incident that the Audi driver had “failed to stop for police patrols”. The spokesman added: “The incident was eventually brought to a tactical conclusion on Victoria Viaduct.”

Neale pleaded not guilty in court today to a further charge which alleged the theft of a set of keys belonging to a teenage boy. In response to that denial, the prosecution announced that no evidence would be offered in relation to that allegation.

The case was adjourned for the probation service to prepare a pre-sentence report.

Neale, of William Street, Cotehill, near Carlisle, was granted conditional bail by Judge Potter, and is due to receive his punishment for the two driving offences at the crown court on 20th September.

In the meantime, Neale was made subject to an interim driving disqualification.

A person was taken to hospital after becoming trapped in the rock armour on the shore of Whitehaven yesterday.