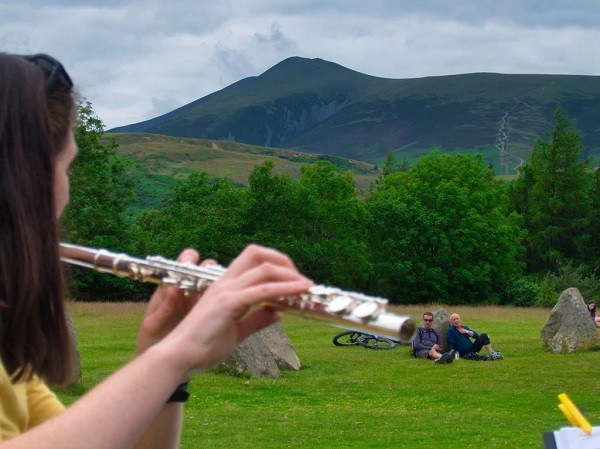 Creativity enhancing outdoor retreats are being delivered thanks to new business started by a student.

Sylvie Heath, who studies at the University of Salford, has launched her business Creative Heights,  offering day courses and weekend retreats to musicians and other professionals with the aim of connecting nature and the arts through adventure in the outdoors.

Sylvie is currently studying part time for a master’s in Music Performance at the University of Salford. Alongside her studies Sylvie is working as a peripatetic music teacher, working in primary and secondary schools, as well as running community groups in Cumbria and Lancashire.

The idea for Creative Heights came after Sylvie was signed off from her role as the Head of the Music Department in a school in the North East for eight months due to stress and “teacher burnout.”

Sylvie said: “The common issue for many secondary school music teachers after so many years is that it takes away from your own music practice, it doesn’t leave much space for you to actually be a musician.

“You end up teaching music, but not being a musician yourself.”

During her time away from work Sylvie was able to rediscover her passions for both music and the outdoors.

She said: “I started practicing more and started collaborating with local musicians, but I was also doing a lot of triathlon training and spending a lot of time outdoors.

“When you’re suffering with stress sometimes you just can’t use your brain, your brain just kind of goes on strike, but physical sports you can still do.

“I realised there was a positive connection between the outdoor sports and my music practice, the wellbeing gained from the outdoors such as resilience building, clearing the mind and fresh air was feeding into the creative process.

“I wanted to provide these opportunities of adventure and creativity for other people.”

The Launch @SalfordUni business incubator has supported Sylvie by providing access to office space as well as masterclasses and one-to-one sessions with experienced entrepreneurs and experts from the University of Salford Business School.

Justyna Turner, Incubation Manager at Launch said: “Sylvie is working on a brilliant project and she has demonstrated great passion and dedication throughout her time with Launch. She has fully engaged with the programme and has worked hard to develop her business idea further. I’m looking forward to seeing how Creative Heights will progress and I am sure it will be a great success.”

The retreats and workshops Sylvie organises can be tailored to suit any age, ability and experience level. To find out more visit the Creative Heights website.