Government to take over running of Northern Rail 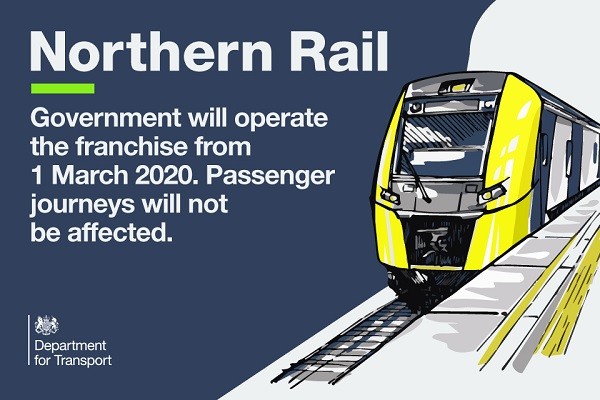 Transport Secretary Grant Shapps has announced that, from 1 March 2020, the government will take over running services on the Northern network.

The government recognises that the rail network in the north has fallen far short of delivering the service passengers need and deserve.

This comes after the Transport Secretary announced on January 9 that the Northern franchise was no longer financially sustainable and would only be able to continue for a small number of months.

Transport Secretary Grant Shapps said: “This is a new beginning for Northern, but it is only a beginning.

“Northern’s network is huge and complex and some of the things which are wrong are not going to be quick or easy to put right. But I am determined that Northern passengers see real and tangible improvements across the network as soon as possible.

“The railways were invented in the north. Last year the Prime Minister promised that we would give the railway back to the places it was born, giving more power over services, fares, and stations to local leaders.

“There will be no more leaving behind. This government is committed to levelling-up.”

The government is committed to delivering real and tangible improvements across the network as quickly as possible, and will introduce a series of measures including;

The government also recognises the scale of the challenge ahead. The Northern network is huge and complex – serving over 108 million passenger journeys a year on 2800 daily services, calling at 528 stations.

To ensure a new vision for the railway is put in place the Transport Secretary has asked Robin Gisby and Richard George, who lead the public-sector operator, to prepare a plan in their first 100 days.

This will be a top to bottom review of everything from operational management, to rostering patterns and, most critically, customer experience, to make sure we leave no stone unturned in improving this franchise for passengers.

It will also include setting up a cross-industry task force to deliver recommendations for improving capacity and performance.

Many of Northern’s problems are infrastructure-related. The Transport Secretary has instructed the leadership of the public-sector operator to sit down with Network Rail and build a comprehensive new masterplan to review congestion around Manchester.

Continuing to assess the Castlefield Corridor, as well as key junctions and interactions across the wider network to develop a series of interventions which will actually deliver the improvements required. Further interventions around Leeds will also be considered.

The government is also reiterating that today’s decision in no way reflects on the staff of Northern. They are dedicated, hard-working and committed to their customers. The government wants to provide reassurance that this decision will not affect jobs or introduce changes to fares or tickets for passengers.

Barry White, Chief Executive, Transport for the North said: “Our hard-pressed passengers have been calling for action for some time – as have our Members. Now, at last, we have the chance of a fresh start. Action has been taken and we can move forward. This new initiative must put passengers first and provide a reliable rail service that rebuilds trust that has been lost.”

He added: “In addition to this change, essential infrastructure is needed to reach the levels of performance and reliability we need, and we now need to see early commitment to this and accelerated delivery from Government.”

Barry said the move provides “a bridge to a better, longer term solution that works for the North” and marks “the start of a journey.”

Transport Minister, Grant Shapps MP, has said it is expected the new franchise arrangement will be formally in operation from 1 March. The decision follows a Request for Proposals issued last year with two options on the table – a Direct Award to the incumbent, Northern, under a short-term franchise arrangement – or an award to the Operator of Last Resort bringing the rail franchise under Government control.

Barry continued: “There may be some changes but we will continue to be a champion for the North’s passengers and expect to be fully involved as things evolve. We will monitor and hold the OLR very closely to account.”  He said that, in making the award, the Government has stated it recognises Transport for the North’s priorities include improving the situation for passengers, improving performance and ensuring the delivery of the franchise enhancements.

“We called for this. It is good the Government has listened,” said Barry. “The DfT has also said it recognises the importance of planning for future growth and enhancements. We want to work in partnership with the operator on the development and delivery of our long-term vision.”

He said what matters first is restoring trust and confidence in the railway, increasing local input and the operator’s accountability and delivering on the Blake Jones recommendations. “Difficult decisions will be needed as we move forward,” he said, “but they should be taken with the involvement of Northern leaders – those closest to the passengers – and they must not prevent the delivery of what has been previously agreed.”

Barry also added that the move also brings the opportunity to rebase performance targets and ensure they best serve the interests of passengers. He said he also expected improvements in leadership. The Department for Transport have been clear that they are committed to delivery of the new baseline of the 2020 timetable and new rolling stock with easier mechanisms for adding enhancements where they are deliverable within the two-year Direct Award period as part of the franchise specification.

“This a significant moment,” said Barry, “it brings with it the chance of greater involvement in the way we deliver connectivity across the Region and it will be further informed as we adopt recommendations from both the Blake Jones and forthcoming Williams Review.”

Transport for the North’s engagement with the Department for Transport is already underway and the organisation has made clear it remains very much part of the team shaping change – both through its existing Partnership Agreement  and through the wider rail-related initiatives it is involved in – including the major rail programmes such as Northern Powerhouse Rail, the TransPennine Upgrade and HS2.

David Sidebottom, director at the independent watchdog Transport Focus, said: “After years of misery Northern passengers just want a reliable service. In our latest survey Northern passenger satisfaction is at an all-time low. They deserve better.

“Passengers need to hear when services will get back on track. Government must now provide a plan, including much needed investment in infrastructure, to enable the next operator and Network Rail to improve performance and tackle overcrowding.

“The rail industry must listen to passengers and communicate its plan to improve services and rebuild trust.”

MP Tim Farron said: “This is a big, big win for rail passengers here in Cumbria and across the North West.

“On the Lakes and Furness lines we’ve had to endure years of chaos and cancellations, and at one point we even had to step in and run our own service when Northern simply gave up.

“I want to say a massive thank you to everyone who supported our campaign, whether joining us on our protest walk from Windermere to Oxenholme, or signing our petition that we presented to 10 Downing Street.

“But we are under no illusion that, while the chances of the service improving under Arriva were zero, problems on our rail lines will not automatically disappear.

“The Government need to put their money where their mouth is and make sure that we are not left in the same situation where our railways are run by a company without the sufficient staff to run a regular service.

“Let’s not also forget that some of the blame for the shambles over the past few years, lies at the Conservative Government’s doors – cancelling electrification and capacity upgrade projects such as two new platforms at Manchester Piccadilly.

“We will continue to hold the Government’s feet to the fire to make sure they keep their promises to rail passengers across the North.”