Police and Crime Commissioner, Peter McCall is asking the people of Cumbria to help to maintain and improve policing services through supporting his consultation, which proposes an increase in the policing part of the council tax.

The police council tax precept is an essential part of the council tax that contributes alongside a central government grant to the total funding available to provide policing, community safety and victims’ services. 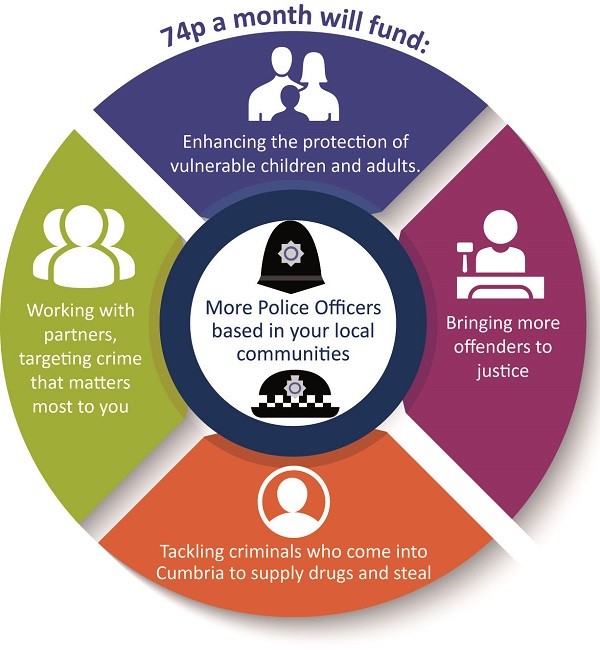 Police and Crime Commissioner, Peter McCall said: “Over the last two years working with the Chief Constable and with your support as council tax payers, we have been able to increase the number of police officers by 45 taking the number of officers in the county from 1,120 in 2016 to 1,165. This would not have been possible without the support of residents.

“The government previously announced additional funding for 20,000 new officers across the country. Cumbria has been allocated 51 new officers and some are already out on our streets catching criminals. This will bring our police officer numbers to one of the highest levels at 1,216 in the next year. The Chief Constable has plans to deploy these officers back into the community and this increase in visibility is what people consistently tell me is their key priority. Whilst this is very welcome the additional government grant leaves little or no spare resource to maintain existing services and policing like any other service is also affected directly by inflation.

“The Chief Constable needs an increase in council tax precept to maintain and more importantly, further improve our existing service by expanding the police presence and physically basing more officers in rural communities.

“I wish I could achieve this without any increase in tax, but I have to be realistic and face the stark reality crime is changing and becoming more complicated for example, county lines is more prevalent. Often the drug supply is now from outside the region. This by its very nature adds a complexity.

“The announcement from government last week provided for raising council tax precept up to £10 a year for a band D property. I feel that the residents of Cumbria have paid significant levels over the last two years and I am not willing to ask for such a high level again.

“Following the request from the Chief Constable I am proposing that the policing precept of council tax is increased by 3.5% which would equate to just over 74p a month increase for a Band D* property. This increase would continue to address the issue raised by most residents that they want to see more visible police officers in their communities.

The Commissioner continued: “Looking forward to the next five years the risks in our communities and the pressures on Cumbria Constabulary will continue to grow and become even more challenging. By asking for your support we can maintain the high quality police service and build long-term resilience keeping us all safe. I am determined that we must do all we can to ensure that the increasing levels of serious violence and drug related crime we see in the larger cities in the country are not replicated in Cumbria. We need your support to ensure this and put more officers back into our communities where you tell me you want to see them.”

Chief Constable Michelle Skeer added: “Over the past two years the communities have, via their council tax precept, enabled us to have more officers. Some of the officers have extended our reach and are visible in local communities, tackling local crime. The other officers have dealt with the often unseen element of policing, which threatens our communities such as safeguarding and protecting vulnerable people, managing dangerous offenders, online fraud and crime as well as cross-border crime.

“There has also been a national programme to increase the number of Police Officers – we have been allocated an additional 51 Police Officers to March 2021. We have quickly increased the number of student officers, so we can start their training and get them into your local communities as soon as possible. We’re the first force nationally to have some of these officers on operational patrol, targeting criminals in local communities.

“It is great news that I have almost 100 extra Police Officers, however I have reluctantly asked the Police and Crime Commissioner for an additional 74p a month (for band D properties). This will enable us to continue to improve on the big steps we’ve taken over the past few years to help us fight the risks that threaten the safety of our local communities – particularly cross-border crime such as the supply of drugs, ATM theft, theft of quadbikes and plant from rural communities.

“The additional funding would enable us to further extend our reach into communities, both urban and particularly rural, where communities would have more officers physically based locally.

“I am very proud to lead a top performing force, we are graded as GOOD across the board by our inspectorate and one of only 2 forces, nationally in the first inspection, to be graded as OUTSTANDING in how we understand how crime affects our communities and respond effectively.

“I hope that the public continue to support Cumbria Constabulary to ensure we can continue to improve our service to our communities, protecting victims, safeguarding vulnerable people, pursuing offenders effectively and tackling organised, cross border crime to keep Cumbria safe.”

The increase from council tax precept in 2018/19 and 2019/20 has already made a significant impact on our streets with;

A link to the survey can be found here: https://www.smartsurvey.co.uk/s/7T1GF/

The survey runs from Thursday 30 January to Friday 14 February.

*Most properties in the county in fact fall into a Band B, which would mean an increase of only 58p a month