The Principal of Furness College went head to head with Barrow and Furness’ new MP in a battle of skills as part of National Apprenticeship Week.

Andrew Wren took on Simon Fell in a series of challenges in the college’s industry-standard hair and beauty salon with the college boss enjoying a clean sweep of wins.

They were tasked with a roller challenge, haircut and eyebrow shape and the winner was judged by hairdressing students and the specialist staff at the Channelside campus.

Hannah Whitaker, who demonstrated the technique for the hair tasks, said she had been impressed by their commitment. “The challenges are set to test a range of skills including maths, science, listening and communication that are all needed to be successful in this competitive industry. They did really well.”

Hannah completed Level 2 and Level 3 apprenticeships at Furness College where she now works as curriculum technician.

Head of Area for Hair and Beauty Isabela Brathwaite demonstrated the eyebrow shape on staff member Sandra Crease, who volunteered to help out.

Andrew Wren said the college wanted to do something to mark National Apprenticeship Week to show the range of apprenticeships offered by the college – from barbering to beauty, management to motor vehicle – with 700 apprentices trained each year.

“It is important to appreciate the skills that young adults gain when they take an apprenticeship. There is obviously a lot more skill than you might expect,” he said.

He was judged first in all three tasks and complimented for his cut by Hannah who said ‘do you want a job?’

Simon Fell MP said, despite losing, he had enjoyed the challenge and it followed a series of events for National Apprenticeship Week held in the Houses of Parliament.

He said it was important that people saw parity between skills mastered during an apprenticeship and an academic route.

“Furness College is an amazing place for taking people from the community and giving them the skills to get into work,” he said.

The college has taken part in a series of events for National Apprenticeship Week, including an #AskAnApprentice online discussion, inviting apprentices in to talk about their progression paths and a visit by 65 students from both campuses to the UK Apprenticeship and University Fair in Manchester. 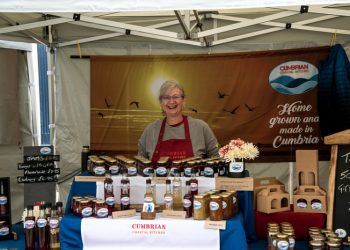 A family tractor and farm equipment business has established a strong presence in Penrith over the past 18 months and...