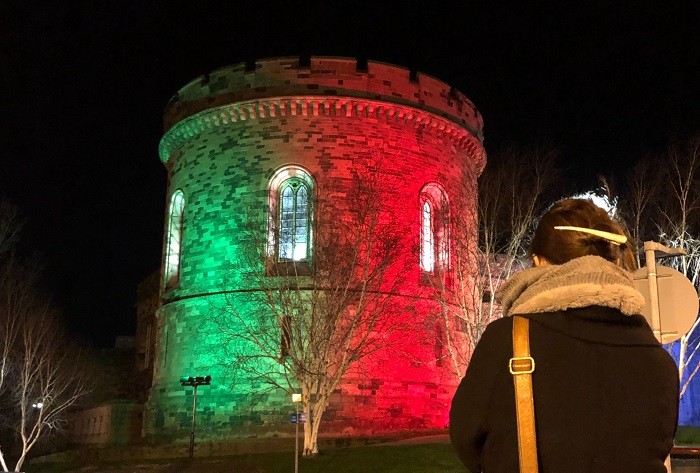 Local businesses have given their backing to four days of eye-catching illumination displays, events and promotions.

Coloured lights and projections were switched on this evening at a host of buildings and city landmarks, including the Citadels and Carlisle railway station around Court Square.

And hundreds of people have already begun flocking to the city’s cathedral for the festival’s centrepiece – a stunning space-themed sound and light show inspired by the 1969 Moon landings. Thousands have snapped up tickets for this visual spectacle, which will also run tomorrow and Friday.

This week’s City of Lights project is a partnership between Cumbria County Council and Carlisle City Council, is backed by a range of partners and being delivered under the “Love Carlisle” brand.

Cumbria County Council chair Christine Bowditch said at this evening’s launch: “It will be a celebration of what’s best in Carlisle, and what it has to offer in terms of heritage, history and buildings. I hope it gives a real boost to the community.”

Carlisle’s mayor, Marilyn Bowman, spoke of being “very excited” about a festival which, she said, was “absolutely fantastic for the city”. She added: “I hope this provides a real economic boost for our businesses – and our residents as well. That’s what it’s intended to do.

“Let’s go out there and enjoy it!”

*Ticket for all Carlisle Cathedral show sessions must be bought in advance from the city’s tourist information centre at the Old Town Hall, or from discovercarlisle.co.uk.