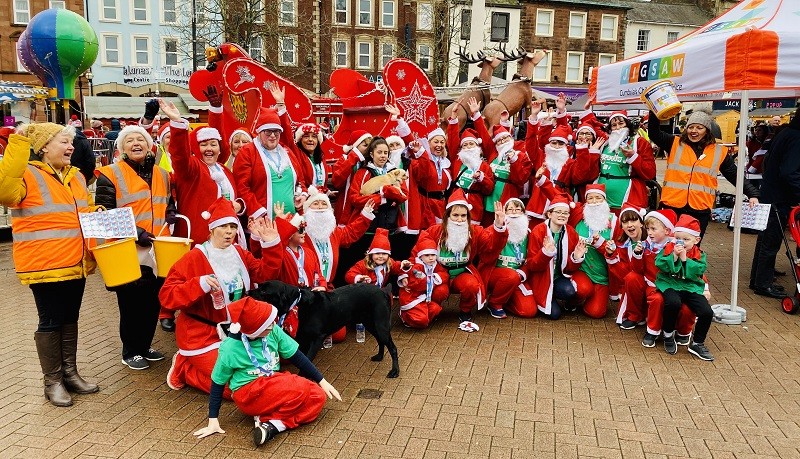 In December 2019 hundreds of fundraisers took part in the annual Carlisle Santa Dash. A sea of Santas filled the streets of the city raising vital awareness and funds for Jigsaw, Cumbria’s Children’s Hospice.

The event, which took place on Sunday 9 December 2019, received fantastic support from fun runners, local running clubs, businesses, sponsors and the local council. The kindness and generosity of everybody involved with the event helped to raise a record breaking £10,001.53 for the local charity.

Last December’s event included a team of runners made up of staff, volunteers and young people from Jigsaw who could be heard singing Christmas songs all around the route. 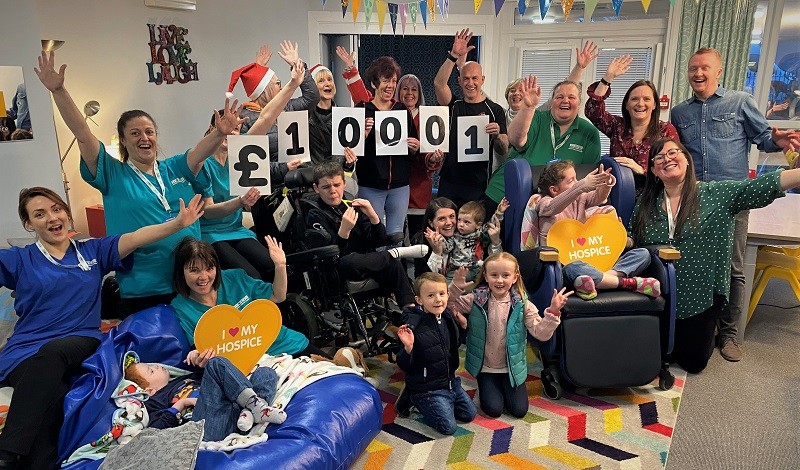 Event hosts, Claire and Brian Allen from Sport in Action, explained “both myself and Brian are amazed at the total raised again this year”, said Claire. “We always like to try and exceed previous years totals raised. When we added up the amount this time, we could not believe it!”

Claire continued, “We are overwhelmed at the support we have had from the local clubs in Carlisle too. Border Reiver Runners, DH Runners, Carlisle Tri Club and RunMums have come together to help support the organisation of the event and this gives the Santa Dash a real feeling of a community spirit. Everyone wants to see the event be a success so we can raise the much-needed funds for the children at Jigsaw.

“We could not have raised the amount we did without the support of our amazing sponsors; Cubby Construction, Story Contracting, Andidrain, Carlisle City Council, Pirelli, GS Lowry Design, The Cumberland Building Society, Kendal Mint Co., Brewdog, Espresso Hub, Timing Up North, Carlos Reina Photography. They have yet again exceeded our expectations, helped pay for the medals and Santa suits, and to keep costs down, therefore ensuring more money goes to the charity.”

Cllr John Mallinson, Leader of Carlisle City Council, said, “We were pleased to support the Carlisle Santa Dash and are delighted to hear how much was raised for Jigsaw. Thanks to all that took part and supported the event.”

Sam Johnston, Fundraiser at Jigsaw added, “We are so proud to be involved in such a fantastic event. The amount raised this year takes the total raised over the last four events to over £30,000. This continued support is vital to the work that Jigsaw does in our local communities. Thank you to all those who took part, raised sponsorship and supported the event.”

The money raised will help Jigsaw’s specialist team of nurses and doctors to provide the highest standards of care, support and activities to children and young adults with life limiting illnesses. This care and compassion is extended to all of the patients’ families, friends and carers.

The date for the 5th annual Carlisle Santa Dash has already been announced. Look out for a flurry of Santas on Sunday 6 December 2020. Entries for the event will open later in the year via Sport in Action.

If you would like to find out more information about fundraising in aid of Jigsaw, Cumbria’s Children’s Hospice please contact the Fundraising Team on 01228 810801 or visit www.jigsawhospice.org