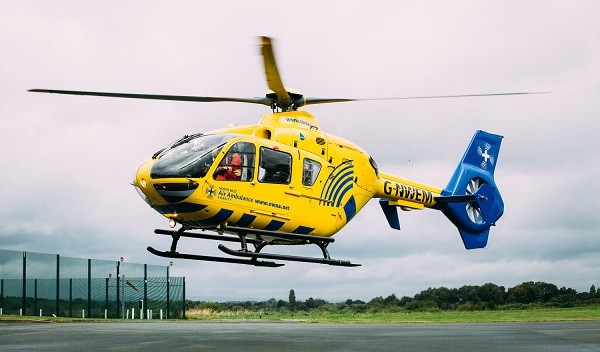 As the North West Air Ambulance Charity (NWAA) continues to celebrate 21 years of service, former patients are sharing their survival stories to say thank you to the crew members who saved their lives.

In July 2017, Nick Little, 47, Barrow, was out on a cycle near Broughton Beck, Ulverston, with two friends.

After overtaking and mistiming a corner, he collided with a wall at speed and was thrown from his bike to the side of the road. Nick shared: “I remember I was in shock at first, so couldn’t really feel any pain. I was more concerned my bike had been mangled! It wasn’t until I saw the look on my friends’ faces that I realised how serious the situation was. They were begging me to stay still, and I could feel blood pooling in my helmet. I was petrified.”

By chance, a nearby mountain rescue team came across the scene, along with local GP Dr. Charley Brankin, who began to assess Nick. The North West Ambulance Service soon arrived, before requesting NWAA to the scene given the severity of his injuries: “The nearest hospital to me was Furness General, but given the state I was in, the air ambulance was alerted. After the crew gave me a thorough assessment, they decided to treat and airlift me to the Royal Preston as soon as possible.”

Nick’s injuries were extensive: three fractures to his spine, a bleed on the brain and multiple cuts and bruises. Miraculously, he was discharged from the Royal Preston five days after admission, and began his recovery – grateful to still be alive to see his friends and family.  “One momentary lapse of my concentration nearly cost me my life, and if it wasn’t for the heroic work of NWAA, my friends, the mountain rescue team and Dr. Brankin, I simply wouldn’t be here today.”

Operating 365 days a year, NWAA is entirely charity-funded. Its crew of Helicopter Emergency Medical Service (HEMS) paramedics and consultants bring specialist care directly to the scene, ranging from anaesthesia and blood transfusions, to surgical interventions. The crew’s work can make the difference between life and death, especially for urgently unwell patients or those involved in traumatic incidents.

Deborah Rigg, HEMS paramedic is one of the crew members who reached Nick on the day of his accident: “Often in cases where a patient has suffered head and/or spinal injuries, getting them to the definitive treatment centre is vital to their recovery. In Nick’s case, it was Royal Preston Hospital, the major trauma centre for South Cumbria and Lancashire. I have no doubt that the care he received that day on scene, and at the hospital, will have made a significant difference in his outcome and recovery. It was wonderful to see Nick back on his bike raising funds for our amazing charity. Well done Nick!”

Just under six months later, Nick was back on his bike, determined to overcome his fears and enjoy his treasured hobby again. Once safely back on two wheels, he was keen to fundraise for the organisation: “Whilst I knew the air ambulance was a charity before my accident, I didn’t realise it was 100% reliant on donations, with no government support. It needs to raise over £9.5m a year, and I wanted to help them reach this target, so they can continue to be there for other people who might find themselves in my position.”

Nearly two years after his accident, Nick took on the gruelling Fred Whitton Challenge, a 114 mile ride starting and ending in Grasmere, notorious for its hilly climbs. Cycling as part of the NWAA team, Nick completed the cycle in 11 hours and raised £900 to keep the charity flying.

“I’d watched riders taking on Fred Whitton over the years, but always from the side-lines, I’m not a fan of steep climbs! After my accident, I wanted a challenge that would get me on the bike and give something back to the people who were there for me when I need them most. It was incredible to get to the finishing line, I really felt like I’d come such a long way from the day of my accident.”

Nick is still a keen cyclist, and is well on the road to recovery following that fateful day in 2017. He recently celebrated his daughter’s 21st birthday, in the same month that NWAA reached the milestone. He credits NWAA with making sure he was there to mark the occasion: “Immediately after the crash, when I realised how serious things could be, all I could think about were my wife and daughters. I just wanted them to be okay no matter what happened to me. I’m so thankful I’m still here with them.”