A BREWERY is toasting victory after one of the largest pub chains in the country agreed to serve its ale on tap.

Stringers in Ulverston hit the ground running after lockdown was eased and seized the opportunity to secure a deal with JD Wetherspoons.

The brewery’s ale is now on sale at The Furness Railway in Barrow, The Miles Thompson in Kendal, The Woodrow Wilson in Carlisle, The Dog Beck in Penrith and the Velvet Coaster in Blackpool.

Kirsty Ridge, managing director of Lakeland Inns which owns the brewery, said: “For some time we have been working towards the position where, as a brewery, we could offer our ales to the biggest pub chains in the UK.

“To get to this point has taken incredible hard work and dedication on the part of the brewery team and also the wider Lakeland Inns family.

“We have invested a great deal in Stringers since we bought the brewery in 2018 and I’m delighted that this is now paying off in so many ways.”

Key to the brewery’s expansion into the country’s larger pub chains was securing accreditation from the Society of Independent Brewers (SIBA), a quality assurance mark linked to the beer production process 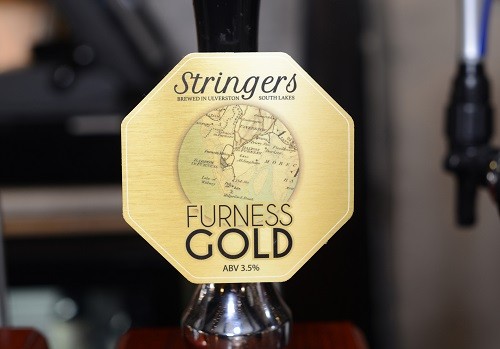 Manager at The Furness Railway Robert Hope said: “ The pub is well known for its choice of real ales and we aim to offer as wide a selection as possible.

“I am delighted that the pub will be serving a beer from Stringers Brewery, which is based nearby in Ulverston.

“It is a great way for us to showcase and support a local brewery.”

Stringers was founded in 2008 by Jon Kyme and was acquired by Lakeland Inns in 2018.

The brewery has been brewing more than 4,000 pints a week and supplying 12 different ales to pubs and bars across the UK since Lakeland Inns invested £50,000 in an expansion programme to increase brewing capacity in 2019.

Stringers has also become increasingly popular due to its selection of gluten-free ales.