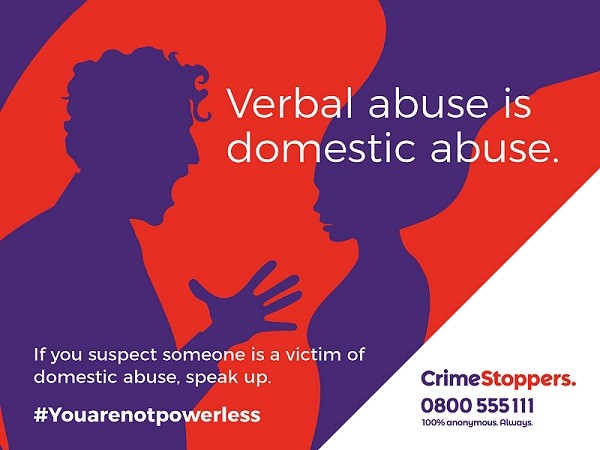 National charity Crimestoppers, working in partnership with Police & Crime Commissioner for Cumbria Peter McCall, have today launched a new campaign to encourage family, friends, neighbours or work colleagues who know or suspect a victim of domestic abuse is suffering in silence, to contact the charity anonymously. By doing so, you could be helping to save a life.

In the last six months, Crimestoppers have seen a 42% increase in anonymous reports about domestic abuse from the public in Cumbria.

In addition, an average of 17 domestic abuse reports are given to the county’s police force every day and the charities and organisations who provide vital support from victims have also seen a significant rise in demand for their services.

It’s estimated that a typical victim endures up to 35 assaults before speaking up, and that can be for many different reasons; fear of losing their children; fear of losing their home; fear of not being believed; even thoughts that they are somehow to blame for the abuse. But bystanders – those in the know whether that’s because they’ve heard or witnessed abusive behaviour, or because the victim has confided in them – can speak up straight away to help stop the abuse and get the victims the support they desperately need.

The campaign highlights the different type of abuse a victim may be subjected to and how to spot the signs. It also provides the public with a quick and easy link from the social media posts taking them directly to our easy-to-use anonymous online form.

Gary Murray, North West Regional Manager at the charity Crimestoppers, said: “Domestic Abuse can be physical, psychological, emotional, sexual or financial. It affects one in four women and one in six men during their lifetime. In too many cases, it results in death with 2 women murdered by a current or former partner each week. Statistics also tell us that 1 in 5 children will witness domestic abuse. It’s shocking to imagine being that victim, terrified to make a wrong move or say a wrong thing, let alone being a child with abuse going on around them, scared, defenceless and alone.

“Each and every day we hear heart-breaking stories from people who are doing the right thing and telling us anonymously when they think domestic abuse is happening. We all need to realise that victims are normally too scared and traumatised to seek help. There was a time when people didn’t know what they could do if they didn’t feel confident in talking to the authorities, but thankfully, those days are over.

“As seen with the rise in reports we have received over the past six months, more and more people are willing to come forward, confident that we will guarantee their anonymity, that no one will ever know they contacted us. Their information, via our charity, helps law enforcement bring a halt to the abuse and violence in the home. Our message is clear – by working together, being aware and reporting what we know, together we can help put a stop to domestic abuse, we can save lives.”

Peter McCall, Police and Crime Commissioner for Cumbria, said: “Many of us believe that domestic abuse does not take place in Cumbria, but unfortunately it does. During the Covid-19 lockdowns we have seen a spike in domestic abuse across the county and I want to remind everyone that you do not have to suffer in silence and that you do not have to stay with your abuser during a lockdown.

“I really appreciate it is much easier to say than to do, but you can leave and seek help at any time and there are organisations ready to help you. Nobody should have to feel frightened or under the threat of abuse in their own home, I would always urge the public to report domestic abuse to the Police on 101 or 999 in an emergency, but I understand that not everyone wishes to report directly.

“If you or someone you know is in an abusive relationship and wish to stay anonymous please contact Crimestoppers.”

To report domestic abuse 100% anonymously, visit our charity’s website Crimestoppers-uk.org and fill in our simple and secure anonymous online form or call our 24/7 UK Contact Centre on freephone 0800 555 111.

Please note: Computer IP addresses are never traced and no-one will ever know you contacted Crimestoppers. For telephone calls, they have no caller line display, no 1471 facility and have never traced a call.