That was up from 19 the previous year.

Of the thefts reported in the latest 12-month period, the largest number – six – happened in August 2020.

The national figure excludes data from South Yorkshire Police for March this year.

Sales platforms have seen a rise in puppy and kitten prices over the last year as more people look to buy or adopt during the pandemic, the Government said – with reports suggesting the increase in demand may have fuelled a national rise in pet thefts.

Although many dog owners would consider their pet another member of the family, the animals are currently considered as property in law.

This means there is no standardised way for police forces to record or search for the number of dog thefts, leaving the true scale of the issue largely unknown.

But a petition calling on the Government to make dog theft a specific offence had garnered 316,500 signatures by its deadline on Thursday, May 20, meaning it is well over the threshold to be considered for debate in parliament.

Around 30,300 people across the North West have contributed their signature to the cause.

The petition is calling for dog theft to carry an eight-year minimum sentence and a fine of at least £5,000.

Prime Minister Boris Johnson is considering tougher sentencing for the crime, which could see dog thieves prosecuted under animal welfare laws instead of the Theft Act 1968, The Times has reported.

Earlier this month, the Government launched a new pet theft taskforce to investigate the rise in thefts nationally since the start of lockdown restrictions.

It will also introduce a new law to recognise animals as sentient beings which can feel pleasure, pain and fear.

The Stolen and Missing Pets Alliance, which has long campaigned for reform of laws around pet theft, said it is pleased the issue “is being taken seriously”.

CEO Debbie Matthews said: “Our pets are priceless, irreplaceable members of our families and the law should reflect this.

“Parliament must make the changes needed and make pet theft a specific offence in its own right, to give the courts access to appropriate custodial sentences to act as a deterrent, provide punishment and protect the public and their precious pets.”

Taskforce partner Amanda Blakeman, Deputy Chief Constable of Gwent Police and the National Police Chiefs Council’s acquisitive crime lead, said: “Dog theft is a very emotive issue which has a huge impact and we are aware of a growing concern around this issue.

“We hope that this is a step forward in providing reassurance that we are committed to understanding any risks fully, and challenging related criminal behaviour.”

Dog’s Trust welcomed the announcement, adding that it would also work alongside the taskforce to crack down on the “despicable” crime.

“We would like to see tougher penalties to act as a deterrent to pet thieves, pet theft treated as a specific crime that reflects the emotional trauma it causes and more accurate recording of incidents by the police so we can ascertain the scale of the problem,” the charity said. 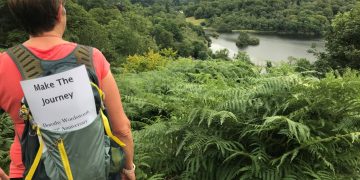 Two volunteers at Wordsworth House and Garden in Cockermouth have shared photos and a poem inspired by Dorothy Wordsworth’s 250th...