West Cumbrian students have given their seal of approval to a new uniform design for their soon-to-move school.

The colours and logo will be adopted at The Whitehaven Academy from September – the start of a school year that will also see the completion of its new build.

Students have played a big part in the new look, coming up with designs as well as advising on aspects of the uniform and from September, all students currently in years seven to 10 will receive a new uniform funded by the Department for Education.

Headteacher Nigel Youngman said: “Students were clear they wanted a new logo, but also that they wanted to retain the Whitehaven lighthouse in the design.

“Consequently, we engaged students in putting forward ideas to inspire a final design.

“There were many submissions from across the whole school. All were carefully considered and we drew up a shortlist.

“The result reflects our town’s heritage and rich geographical location.”

The logo is based on the designs of student competition winners Beth Houghton and Katie Wright.

The badge, with its colours of burnt orange and blue, will be incorporated in the new uniform – something students have also had a strong hand in influencing.

Assistant headteacher Marie McMurdo said: “We were focusing on a colour combination that would not only complement each other but would also represent the ethos of our school. The colour blue has strong connections with our coastal location, as well as a strong sense of calm.

“The orange is an uplifting contrast to the blue that promotes creativity and vibrancy. Orange has many positive connotations that resonate with our ambitions for our students and school.”

The Department for Education has supported the funding of the new uniform which marks an exciting development in the school’s progress as part of Cumbria Education Trust.

Mr Youngman added: “There is a clear pride in the school on the part of the students and they wanted a distinct uniform.

“They were overwhelmingly positive about keeping a blazer. Similarly, we consulted about the design, and they wanted to retain a trim.

“The colours of the tie actually came out of really helpful discussions with a group of parents. It was important to us that we involved parents in choosing the right product and the right supplier.

“We are hugely grateful to them for their input.”

The colour combination will feature throughout the new build, which is set to be ready for students and staff to move into next spring.

Mr Youngman added: “The introduction of the new uniform, combined with the expansion of West Coast Sixth Form, exciting plans for our curriculum and the forthcoming move to the new building all mark important stages in the growth of this school.

“We are delighted to have welcomed more students into the school since lockdown and are introducing additional classes in September to accommodate more students.” 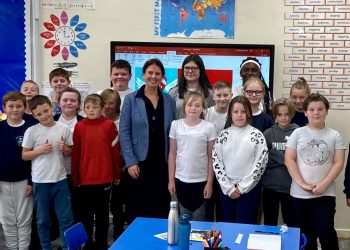 Traffic is backing up as the A595 is closed in both directions at Bigrigg following a three-vehicle collision.