A woman was stretchered off Scafell Pike after breaking her ankle.

The mountain rescue team, who revealed the details of the rescue last night, sent 17 team members to assist the woman and spent more than six hours battling rain and mist to assist the woman, who suffered a suspected broken ankle above Hollow Stones.

The team – who were called out at about 12.30pm – made their way quickly to the scene where their medics gave pain relief and splinted the ankle.

The casualty was stretchered the long distance off the hill to be met by an ambulance.

“We hope the lady makes a quick recovery,” a statement from Wasdale Mountain Rescue Team said. 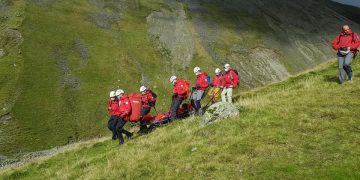 A woman was stretchered off Scafell Pike after breaking her ankle.