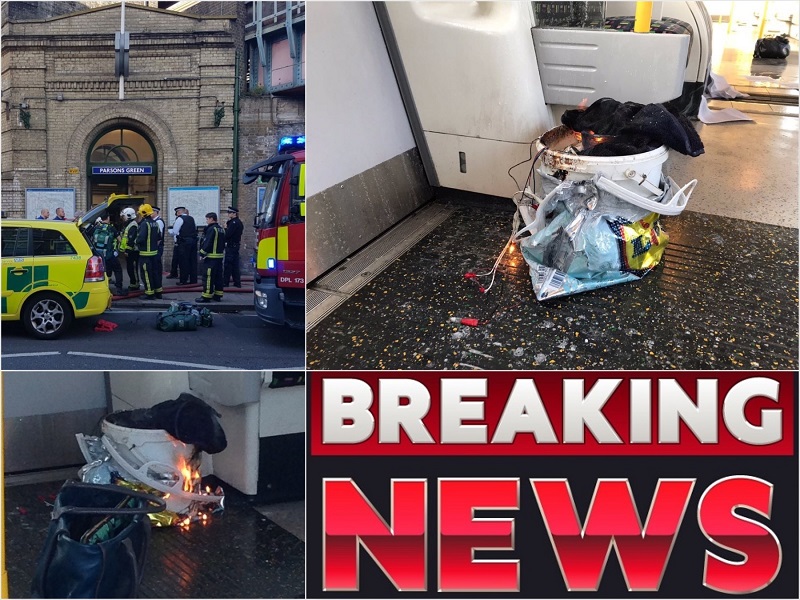 [O]fficers from the Met’s Counter Terrorism Command are investigating after an incident on a London tube train this morning.

Police were called at approximately 08:20hrs today (Friday, 15 September) to Parsons Green Underground Station following reports of a fire on the train.

Witnesses reported a fireball causing burns to some commuters, others were crushed trying to flee the station, one eye witness told BBC News that it was like a scene from Hillsborough.

He said: “Officers from the Metropolitan Police Service and British Transport Police attended the scene, along with colleagues from London Fire Brigade and London Ambulance Service.

“At present we are aware of a number of casualties.

“It is too early to confirm the cause of the fire, which will be subject to the investigation that is now underway by the Met’s Counter Terrorism Command.

“The station remains cordoned off and police are advising people to avoid the area.”

Natasha Wills, Assistant Director of Operations at London Ambulance Service said: “We can confirm we treated a total of 19 patients – mostly for minor injuries – and took them to three hospitals: St Mary’s, St Thomas’ and the Chelsea and Westminster..

“We were called at 8:02am with the first ambulance arriving in under five minutes.

“We sent multiple resources to the scene including responders in cars, ambulance crews, incident response officers and our Hazardous Area Response Team.

“We are working closely with our colleagues from the Metropolitan Police, British Transport Police and London Fire Brigade at the scene; ensuring patients receive the medical help they need as quickly as possible.”

“As we are very busy dealing with this incident, we would ask the public to only call us in a genuine emergency.” 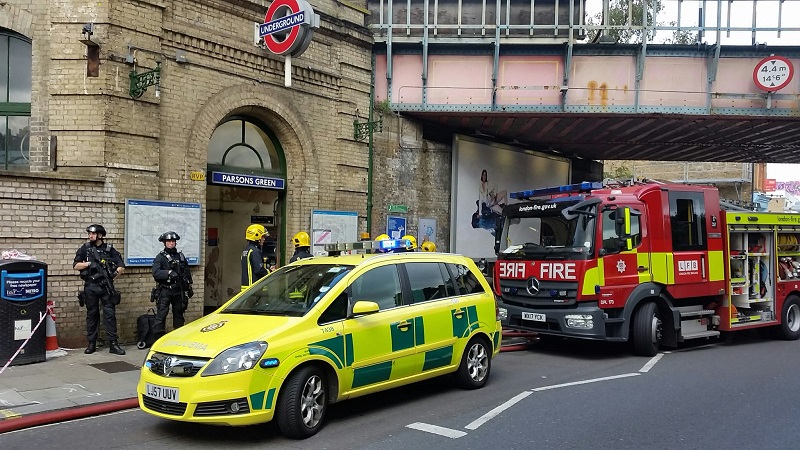 London Fire Brigade, Director of Operations Tom George said: “The Brigade was called at 0821 and firefighters were on the scene within three minutes. Fire crews assisted the London Ambulance Service in treating casualties on the affected train.

“Firefighters also helped evacuate 253 people from a train not involved in the incident. We continue to support the Metropolitan Police and other services at Parsons Green.”

Fire crews from Fulham, Wandsworth, Chelsea, Hammersmith and other surrounding fire stations are in attendance.

Mayor of London, Sadiq Khan said: “The Metropolitan Police have confirmed that the explosion on a train at Parsons Green Station this morning is being treated as terrorism.

“Our city utterly condemns the hideous individuals who attempt to use terror to harm us and destroy out way of life.

“As London has proven again and again, we will never be intimidated or defeated by terrorism.

“I am in close contact with the Metropolitan Police, Transport for London, Government and other emergency services who are responding at the scene and leading the investigation. I will be attending the emergency COBRA meeting in Whitehall this afternoon with the Prime Minister.

“My sincere gratitude goes to all our courageous emergency responders and the TfL staff who were first on the scene.

“I urge all Londoners to remain calm and vigilant and to check TfL’s website for travel advice.”

UKIP home affairs spokeswoman Jane Collins MEP said: “The time has come to ramp up our responses to dealing with extremism of all kinds.

“We need more investment in our counter terrorism services just like we need more bobbies on the beat.  We need root and branch reform of statutory institutions where extremism is taking hold and the police need to concentrate on real threats not on people having twitter arguments.

“One way we can deal with  extremists is by ridding this country of hate preachers and the kinds of institutions where extremist beliefs are taught.  This is where the government is so wrong to committ to remaining in the ECHR and under the jurisdiction of Europe.  We must have the power to kick out hate preachers just as we must have the power to deal with homegrown terrorists.”

Anyone who has information that would assist detectives is urged to contact the hotline 0800 789321; if it’s any emergency always call 999.

Anyone with images from the scene is asked to upload them to www.ukpoliceimageappeal.co.uk.