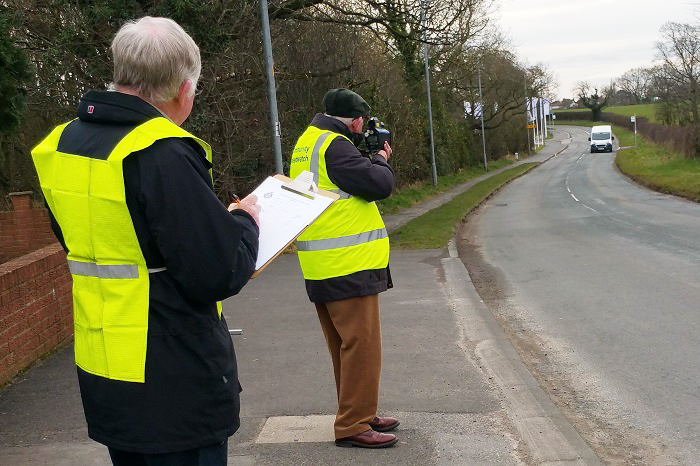 [A] number of schemes implemented in the Carlisle area targeting speeding are proving successful.

Since February 2017, 15 Community Speed Watch Schemes have been launched in a bid to reduce the number of motorists speeding in Carlisle and the surrounding area.

The schemes, which have been a joint venture with local parish councils and communities, have registered reductions throughout the area in which they were operating.

The schemes consist of members of the local community joining together to monitor speed at selected locations with speed detection devices. The speed of the offending vehicles are recorded and passed to police. A letter of caution is then generated and sent to the registered keeper warning them of the dangers of excessive speed.

Of particular note, schemes in Cumwhinton and Dalston have recorded marked reductions in the number of motorists speeding from their first recordings to their most recent. In Cumwhinton 188 vehicles were recorded during the first period compared to the recent allocation of 94. Dalston has seen recordings drop from 98 to 35.

Sergeant Scott Adams said: “I am really pleased to say that the schemes have been successful in reducing the number of motorists speeding and the overall speed of vehicles.

“Speeding is an issue that many communities face as motorists continue to ignore the very real consequences of driving at excess speed. By empowering local people who want to make a difference we have seen a reduction in speeding vehicles.

“I’d like to thank all community speed watch volunteers and the local parish councils who are part of the schemes for their ongoing support.

“We all know the dangers of speeding, yet people continue to drive far too fast in built-up areas. Those that continue to do so are putting themselves and other road users at great risk of death or serious injury.”

Katriona Sharpe, who is part of the Dalston Speed Watch scheme, said: “Being a part of the Speed Watch team is great because you have all the relevant training and support when needed. When we have the equipment I can go out as often as I like to monitor vehicle speeds. When out, traffic are aware and generally slow down which is the overall result that we want.”

Andy Davidson, a member of the Speed Watch scheme at Thurstonfield, said: “The scheme is an excellent initiative which allows people in the local community to help make their local roads safe. The training and actual use of the equipment couldn’t be made easier. The good thing is you only need to be out using the equipment when it is convenient to you.

“The scheme in Thurstonfield has only been running for a short while and already over 150 speeding referrals have been made to the police which makes clear there is a real need for these types of schemes. I personally gain a great deal of satisfaction from knowing we are helping to make our roads safer for all. I would fully recommend the scheme to anyone who feels they may be able to make a contribution.”

A Houghton Speed Watch volunteer stated: “We have noticed that vehicles do tend to be close to the speed limit when we are operating though we observe noticeably higher speeds when we are not carrying out a Speed Watch session.

“Our deterrent effect would be greater if we were able to do more sessions but for that to happen we do need more volunteers. People only need to be in a position to offer a few hours every six weeks or so to support this worthwhile community activity.”

Cumbria’s Police and Crime Commissioner Peter McCall said: “Speed Watch is a great example of how local communities working together with the police and others, are helping to keep their local areas safe.  The issue of speeding vehicles is something that members of the public raise with me regularly, and I am looking at what I can do to facilitate more schemes like this.”

If you would like to join a current scheme in operation or would like further information on setting up a scheme in your area please contact Sgt 1662 Scott Adams at Cumbria Police.