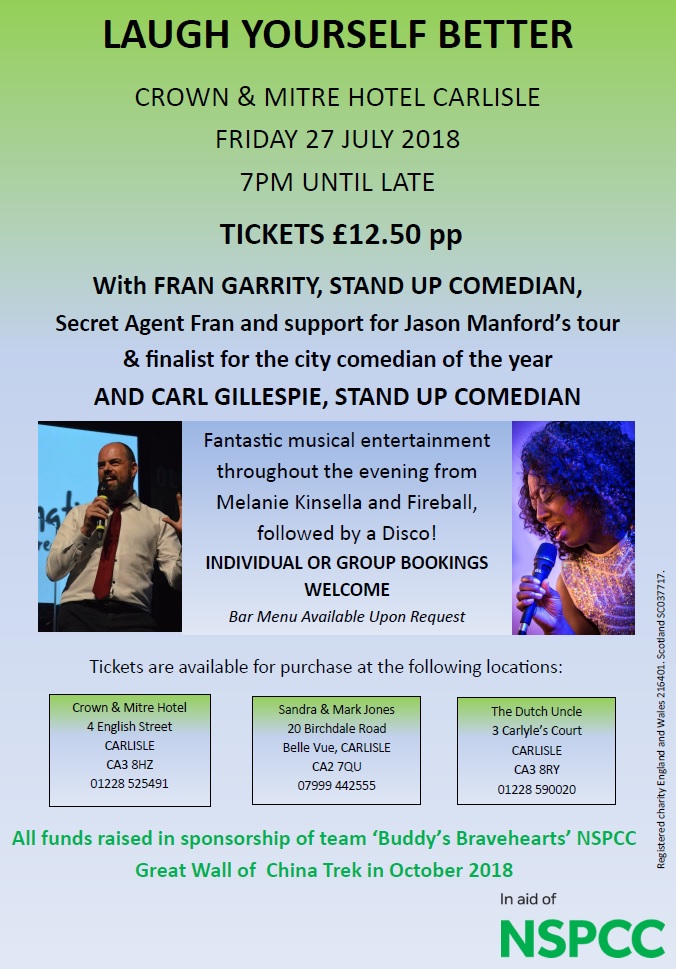 [G]roups of friends and families are being urged to snap up tickets for a comedy night in Carlisle raising funds for the NSPCC.

At the event, being held at the Crown and Mitre Hotel on Friday, July 27, there will also be an auction with lots including a signed Manchester United team football shirt and two nights for a family in a Hobbit Hole at The Quiet Site, in Ullswater.

Another prize up for grabs is a fantastic evening with celebrity chef John Crouch, who will come to your house and cook a meal for up to eight people.

Sandra Jones, who is the NSPCC’s fundraising manager for Cumbria and has organised the event, is part of a team which is embarking on a week-long sponsored trek of the Great Wall of China in October to raise money for the children’s charity.

The comedy night is one of a number of events, which will raise sponsorship for the trek and ultimately go to help the NSPCC protect more children from abuse and neglect.

In 2016/17 there were 547 sexual offences against children under the age of 16 recorded by police in Cumbria. Also in the region, there were 413 children subject to a child protection plan and 660 young people in care.

Last year, 276 referrals were made by the NSPCC helpline to local agencies such as the police and children’s services in Cumbria. Also, during that period, staff at the NSPCC Service Centre in Carlisle worked directly with 131 children.

Sandra said: “The comedy night promises to be a very enjoyable evening. These two comedians are very funny and there will also be some fantastic musical entertainment from Melanie Kinsella and Fireball, and a disco to end the night.

“We have been training hard for our trek and we would like to raise as much money as we can in sponsorship. Every penny raised will go to support the invaluable work of the NSPCC.”

Rebecca Lynch, Conference and Events Manager at the hotel, said: “It has always been a very popular and successful evening, so we are expecting the same again this year. We’re delighted to be hosting this event, which is for a very good cause.”

Tickets for the comedy night, which will take place on July 27 from 7pm until late, cost £12.50 each. They can be purchased from the Crown and Mitre Hotel, in English Street; the Dutch Uncle, in Carlyle’s Court; and from Sandra on 0759 0450647 or email [email protected]