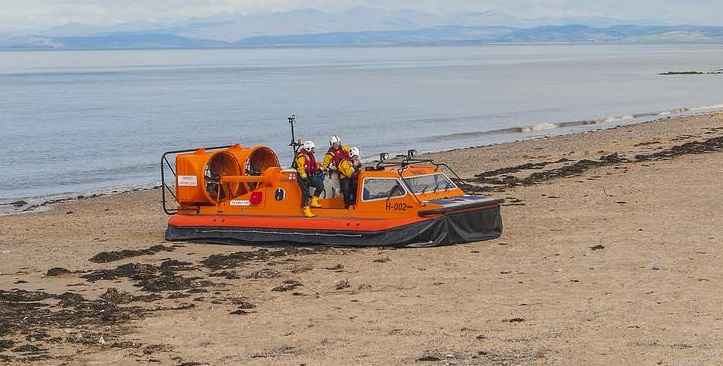 At 7.45pm on Sunday 24 June 2018, HM Coastguard requested Morecambe’s RNLI volunteer lifeboat crew to assist paramedics, police and local coastguards who were responding to reports that an 8-year-old boy had fallen from the cliffs behind St Peter’s church in Heysham.

Within 10 minutes of the request, the inshore rescue hovercraft was launched onto the flooding tide and proceeded to the scene.

The volunteer crew then stood by until the air ambulance had successfully landed on the beach and the injured child evacuated to hospital; after which the hovercraft returned to station.

Hovercraft Commander Dave Smith said: “In another 10 minutes, with the incoming tide, the Air Ambulance would have had insufficient room on the beach to land; in which case we would have taken the casualty on board and transported him to an appropriate transfer site.”