“Back to Basics” fun at Guide camp 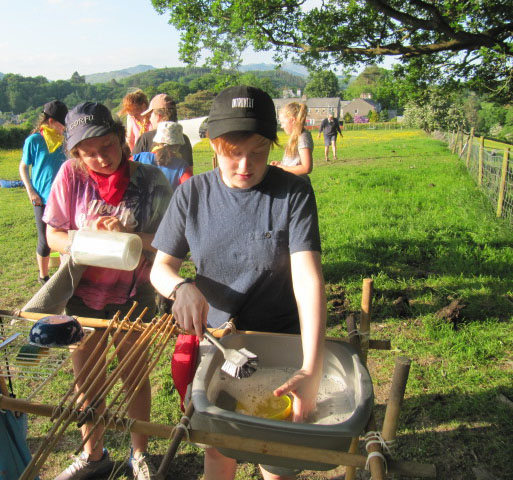 [C]ooking on a fire, using non-flush loos and camping under canvas rather than in modern tents may not be everybody’s idea of an enjoyable weekend’s camping, but 33 Guides and 5 Young Leaders from Broughton and Barrow had a fabulous time doing just that at a recent event.

All meals were cooked on open fires, with sausages on sticks and marshmallows being particular favourites, and the washing up was done on stands made from poles. The girls slept in 8 man tents, keeping them tidy by packing up their bedding every day in groundsheets and ropes to make bedding rolls.

The girls made their own entertainment, also along traditional lines: There was raucous singing around the campfire, archery, armpit fudge was made, and a relay race involving leaking water bottles inevitably ended in a bit of a water fight. The girls earnt the Spend a Penny challenge badge as a result of all the activities.

Guide Leader, Susan Benson, is keen to promote such traditional pursuits, “The girls learn new skills which can be used in the future. We keep the cost down so that everyone has a chance to attend and the girls meet guides from other units, making new friends and learning to work together.”

Maria, one of the Young Leaders said, “I thought camp was such a good experience to get more involved in Guiding and help out with the activities making new friends and learning vital skills along the way. Especially the water fight!”

Girlguiding in the Barrow area is currently going from strength to strength, as a new Rainbow unit to opened in January, although new volunteers are always welcome.