Bars and pubs sign up to Ask for Angela safety initiative 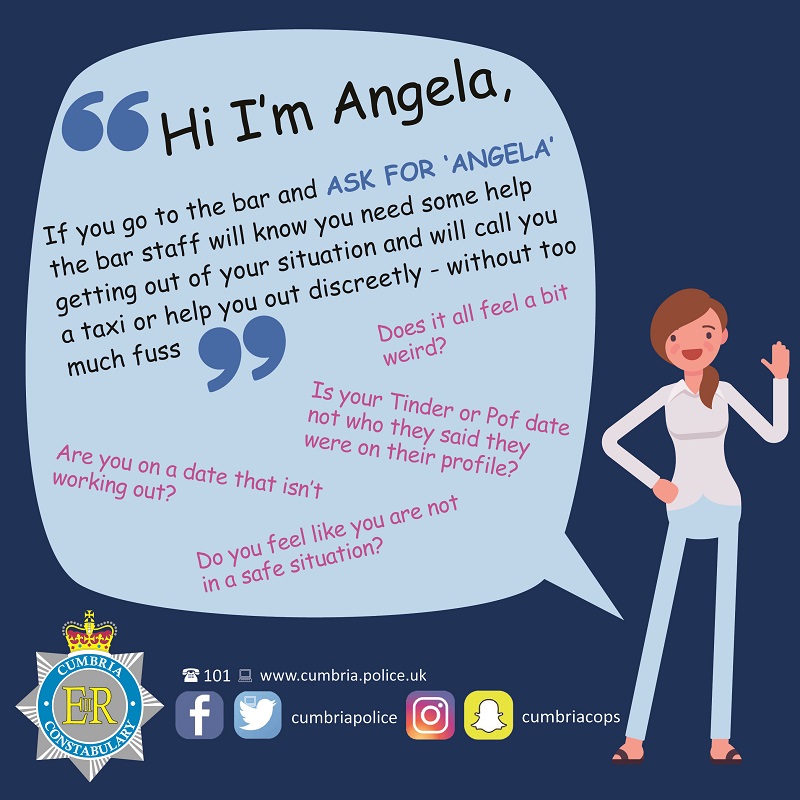 An innovative safety initiative which allows people who feel vulnerable in bars or pubs to discreetly signal for help is being rolled out across both West and south Cumbria.

Ask for Angela is a simple code word campaign for people feeling unsafe when on a date. It encourages people to discreetly ask for help by going to the bar and Ask for Angela – a phrase aimed at alerting staff for help so they can defuse a situation.

Once alerted, the person is taken aside or to a safe location so they can speak in confidence about what help they may need. Staff can then call a taxi, contact their friends or family or direct the individual out of the venue via an alternative exit.

Members of both schemes have been briefed on the initiative ahead of the launch. Promotional posters advertising the scheme have been distributed and will be placed in venues.

A number of licensees in North Cumbria have been running the scheme for a year.

Lisa Elder, West Cumbria Pubwatch Co-ordinator, said: “This is a great initiative for the Pubwatch scheme to sign up to. Safety of the public is a concern that is shared not only by police but also staff at licensed premises.

“We want people to enjoy themselves safely and responsibly when meeting other people. The Ask for Angela initiative is something that we believe can only increase the safety of members of the public when visiting bars and pubs.

“Whilst the campaign focuses on those who are on dates, it also applies to any situation where a person feels uncomfortable or threatened by a person they may have met.”

Wendy Ingham, South Cumbria Bar Watch Co-ordinator, said: “It is incredibly important that people can feel safe when meeting and dating people. Ask for Angela provides a safe and discreet exit method from a difficult situation.

“I am pleased that the members of Bar Watch are fully behind the initiative in order to keep their customers safe.”

Cumbria’s Police and Crime Commissioner Peter McCall said: “What a great initiative this is, I am delighted that the bars and pubs in the county have signed up to it.  For someone who unwittingly finds themselves in a situation where they are feeling vulnerable and scared, to have what is essentially a life-line is invaluable.”