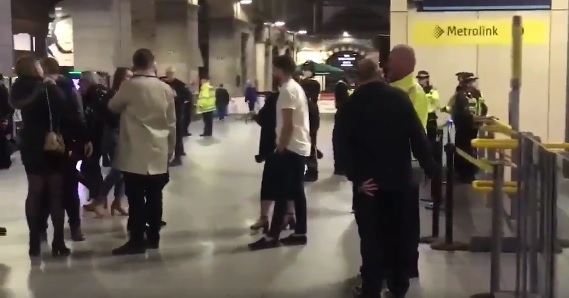 Greater Manchester Police say they have declared a critical incident and that officers from Counter Terrorism North West are leading the investigation after three people were stabbed at Manchester Victoria.

A spokesman for GMP said: “A critical incident has been declared after a multiple stabbing on New Year’s Eve.

“At around 8:50pm on Monday 31 December 2018, officers were called the Manchester Victoria station to reports of a man with a knife.

“A BTP officer is also receiving treatment for a stab wound to his shoulder.

“At this time, their injuries are not thought to be life-threatening.

“A man is in police custody for questioning on suspicion of attempted murder.

“Emergency services will continue to respond to the incident through the night and enquiries are ongoing.”

Assistant Chief Constable Rob Potts, said: “Tonight’s events will have understandably worried people but I need to stress that the incident is not ongoing, a man is in custody and there is currently no intelligence to suggest that there is any wider threat at this time.

“While we don’t yet know the full circumstances and are keeping an open mind, offers from the Counter Terrorism Policing North West are leading on the investigation.

“This is to make sure we have all the expertise to us and progress out investigation as soon as we possibly can. There will be closures in pale aty the station for some time and officers will be in the area throughout the night.”

“A man has been detained and two members of the public, a man and a woman have been taken to hospital with knife injuries.

“A BTP officer is also receiving treatment for a stab wound to the shoulder.

“British Transport Police remain at the scene along with colleagues from Greater Manchester Police and the North West Ambulance Service.”

We continue to respond to an incident at #ManchesterVictoria station. The station is currently closed. Officers are at the scene and a man has been arrested.

A knifeman shouted “Allah” after attacking and stabbing innocent commuters at a train station, an eye-witness said.

Sam Clack, a BBC producer, was on a platform at Manchester Victoria when he witnessed the attack.

Mr Clack, 38, said: “I just heard this most blood curdling scream and looked down the platform.

“What it looked like was a guy in his 60s with a woman of similar age and another guy all dressed in black.

“It looked like they were having a fight but she was screaming in this blood curdling way.

“I saw police in high-viz come towards him.

“He came towards me. I looked down and saw he had a kitchen knife with a black handle with a good, 12 inch blade.

“It was just fear, pure fear.”

We are currently managing an incident at Victoria train station in Manchester. The Metrolink through the station is suspended. More updates will follow.

Mr Clack, on his way to catch a tram home, said police officers used a Taser and pepper spray before, “six or seven” officers jumped on the man.

Mr Clack, who is from Newcastle but is working in Manchester for the BBC, said as the suspect was held down, he said: “As long as you keep bombing other countries this sort of shit is going to keep happening.”

He said it looked like both the man in his 60s and the woman with him had been stabbed but both were conscious and were walked to a waiting ambulance.

Chief Constable Ian Hopkins said: “Last night we experienced a horrific attack on people out to simply enjoy the New Year’s Eve celebrations in Manchester. My thoughts are with the couple who are still being treated in hospital for their serious injuries and with the brave British Transport Police officer who was also stabbed during the attack.

“I know that the events last night will have affected many people and caused concern. That the incident happened so close to the scene of the terrorist attack on 22 May 2017 makes it even more dreadful.  Let me give you the details of what happened last night.

“Just before 9pm the British Transport Police officers at Victoria Train Station responded to a man armed with a knife and swiftly detained him. The officers acted with incredible bravery in tackling the armed attacker at the busy Metrolink station and ensured he was immediately detained. He remains in custody here in Manchester.

“We are treating this as a terrorist investigation which is being led by counter terrorism officers with support from Greater Manchester Police. They were working throughout the night to piece together the details of what happened and to identify the man who was arrested.

“This detailed work will continue and we are currently searching an address in the Cheetham Hill area of Manchester which is believed to be where the man had most recently been living. Our work will continue to ensure we get to the full facts of what happened and why it took place.

“I would ask anyone with footage to send it to [email protected] and if they have any information that might assist the investigation to contact us on 0161 856 3400.”

Police have issued an appeal for witnesses after a man was assaulted by five youths in Barrow.