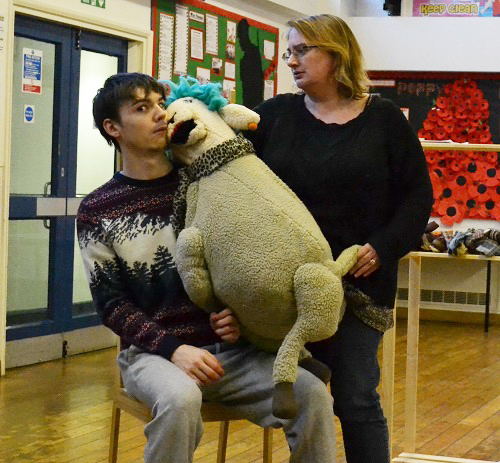 “Travel across the centuries to meet John Dalton, scientist, Quaker and grandfather of atomic theory. Aided by a flock of birds, he puts his case for his work against the backdrop of the building of Sellafield.”

The production, ATOM: A Tale of Matter explores the life of John Dalton (1766-1844) who was born in Eaglesfield, Cumbria and became a renowned scientist after his early work on atom theory.

ATOM: A Tale of Matter is the result of an 18 month project funded by National Lottery Heritage Fund. The project gave Prism Arts Studio Theatre West Coast and students from Distington Primary School and Seascale Primary School the opportunity for them to learn about Cumbria’s nuclear heritage.

Studio Theatre West and Distington Primary School worked together to create the story for the production. They used drawing to develop their ideas through which the theme of birds evolved, each bird representing an aspect of John Dalton’s life. 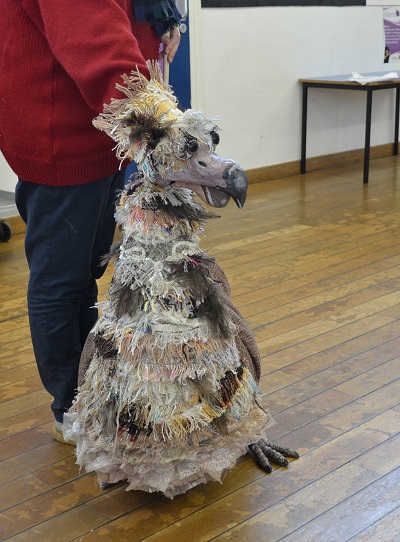 ATOM: A Tale of Matter begins with Dalton’s death, he arrives in a surreal place where the birds gather and reflect on his life and achievements, culminating in the building of Sellafield. John Dalton’s doubts and fears grow through the production and come to a climax at the realisation of his science being used to create the atomic bomb. The production explores whether we can control what the future will do with our ideas and raises the question: “what if?”

ATOM: A Tale of Matter uses puppetry, animation, acting and live music to tell this thought-provoking and humorous tale.

The stunning bird puppets were created by second year costume students from Queen Margaret University, Edinburgh, who worked to designs by members of Studio Theatre West and students from Distington Primary School.

The stop motion animations which are part of the production were created by members of Studio Theatre West who worked with Haltwistle Film Project.

The music in the production was created by musician Mark Newport with two Studio Theatre West members. The three of them play live during the show, one of which performs using a theremin which has been specially designed for him to be able to perform with.

ATOM: A Tale of Matter is being performed to the public at Rosehill Theatre, Whitehaven on the 27th of Feb and 6th March, at 1.30pm. The production is 50 minutes long and is suitable for all ages. Tickets at £6 can be bought by contacting Rosehill Theatre by phone 01946 692422 or by visiting the website www.rosehilltheatre.co.uk

Funded by the National Lottery Heritage Fund, Arts organisation Prism Arts has worked with the Beacon Museum, Sellafield Ltd, Whitehaven Archives, National Nuclear Laboratory and other project partners who have been instrumental to the project research and project delivery.