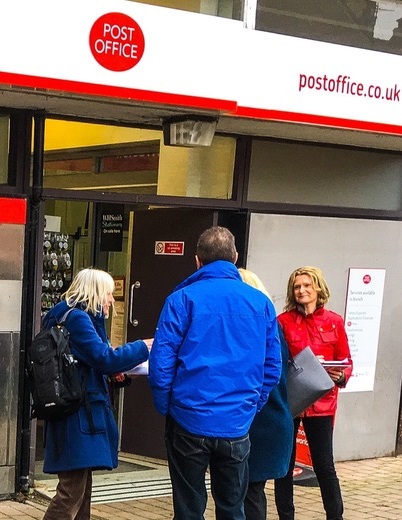 Eden and District Labour Party campaigners and members of the local Communication Workers Union were outside Penrith Crown Post Office this Friday and Saturday morning, encouraging local people to make their many concerns about the decision to close the town’s main Post Office known by signing letters of protest which “Returned to Sender” the proposal of franchise to WHSmith.

Fifty letters were collected from the public, ready to be posted to the commercial management of the Post Office at the Customer Forum to be held at Penrith Parish Centre on Wednesday 7th March.

Campaigners also collected over 650 signatures against the closures of Penrith Crown Office, the Kendal Post Office and the 72 other Crown Post Offices – a third of the Crown post office network – in just a few hours.  They wanted to raise awareness of the Labour Party’s alternative plan to promote and safeguard the Post Office network’s future by keeping Post Offices open and introducing nationally owned Post Banks.  Regional development banks could also invest in communities and local businesses as part of a plan to ensure our high streets are successful again.

Nicola Hawkins, Eden and Penrith Branch Labour Party Vice Chair: “Local jobs are at risk as the Post Office plans to close Penrith Crown Office and relocate to WHSmith. It’s a valuable asset to the town and is a busy, accessible office relied upon by local residents and businesses. The staff in Penrith are well-trained and have a wealth of experience between them which could be lost under the company’s controversial plans.  Penrith’s high streets, as in so many towns, are struggling in the current climate and if this Post Office was to close it would be a major blow to the local economy and to the services which many people rely on. There are already many units standing empty nearby in the New Squares.

“WHSmith has consistently been voted the worst retailer on the High Street in recent years and is not a fitting home for our much valued postal services. Alongside issues with access and service standards, WHSmith operate on a low-wage and bargain basement employment standards ethos. Towns will lose skilled and well rewarded jobs in exchange for minimum wage paying, insecure jobs.

“The people employed at the Post Office, are facing an uncertain future if franchising plans go ahead. Penrith and Kendal are just two of 74 Crown Post Offices announced for privatisation, causing outcry in Cumbria and other communities across the country.  We need a guarantee that Post Offices will be kept open and that improving the quality of service they offer and promoting new community services, such as a Post Bank, will be the priority for the government.”

An online petition has been set-up. Please sign it at: www.saveourpostoffice.co.uk.