Detectives investigating a robbery at a jewellery shop in Carlisle city centre have issued a picture of the bicycle used by the robber.

Officers are appealing for anyone who recognises the bike (pictured) or knows who used it to come forward and get in touch. 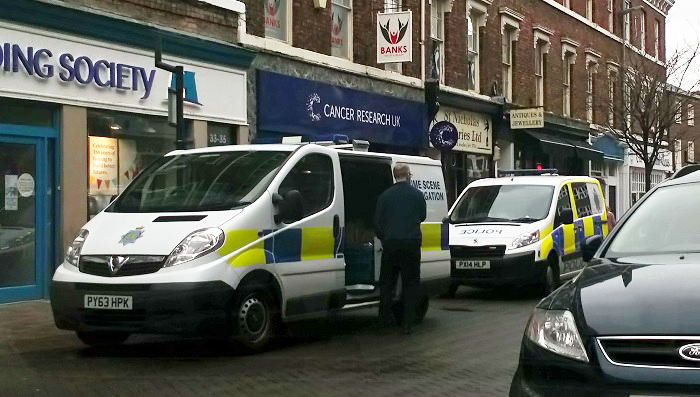 Two men have been arrested as part of the investigation into the robbery at St Nicholas Galleries in Bank Street at about 3.40pm on Friday (March 22).

The arrested men were:

Both were released under investigation.

But police say the inquiry is ongoing and are continuing to appeal for witnesses and anyone who knows anything to contact officers.

The robber arrived at the shop on the bike, which was seized by police.

He said: “Two men have been arrested and released under investigation as part of the inquiry – but the investigation is continuing and we still need the public’s help.

“Please look carefully at the bike, it has distinctive features; look at the white brake cables, the rear mud guard and front suspension.

“If you recognise this bike and know the person who used it, please do the right thing and tell us.

“This is an important line of enquiry and the public can help solve this investigation.”

During the crime, the robber produced a knife before making off with jewellery.

The robber is described as male, about 5ft 9ins tall and of skinny build.

He wore a dark grey jacket, light grey tracksuit bottoms and black trainers.  It is believed he may have been wearing dark or black make-up to disguise his face.

Staff members from the shop were not injured and received support from officers.

If you know anything about the bike, or have any other information, call police on 101, referencing incident 166 of March 22 – or call Crimestoppers anonymously on 0800 555 111.