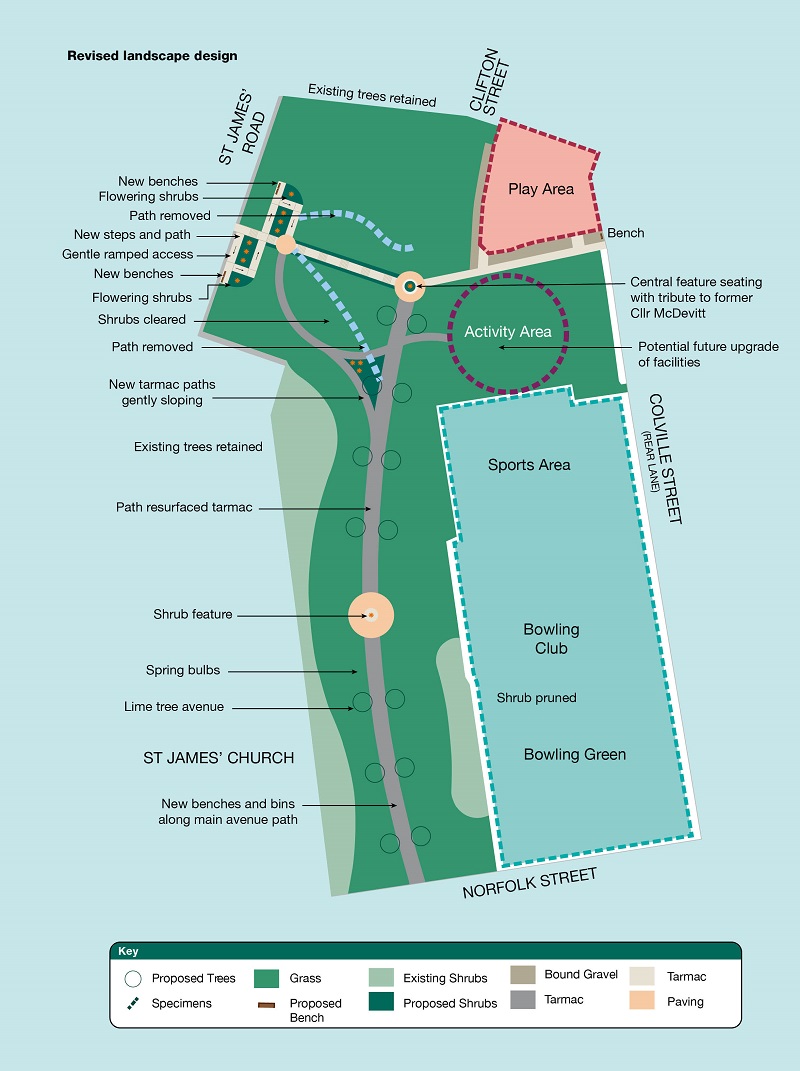 Plans for a proposed refurbishment of St James’ Park, Denton Holme, Carlisle have been given the thumbs up by local residents.

Funding received from the developers of near-by housing projects is providing the opportunity to enhance the park for all its users. Using the funding, Carlisle City Council consulted on the following:

Fifty-six questionnaires were completed, both online and paper copies, and the results from these, together with other comments left by members of public, have been used to refine the plans to progress the project. Changes have been made to the draft proposals to reflect the public feedback received.

The consultation feedback summary is:

Overall, do you support the proposals to develop St James’ Park?

96.3% of those who engaged in the survey were in favour of the proposals, as were those who left comments directly on the council’s social media pages. Community support for the proposals is extremely strong.

Do you support the proposal to create step-free access from St James’ Road to the park?

96.4% of respondents supported this proposal, informal feedback received at both consultation events and whilst engaging with park users also indicate this suggestion is very popular. This aspect of the project has been well received and firmly backed by the community.

Do you support the proposal to create a new pedestrian access from Clifton Street into the park?

This question received the highest number of responses in the survey, with only one participant not providing an answer. Whilst 85.5% of respondents were in favour it should be noted that 14.5% were against this proposal.

Due to the number of responses received which did not support this aspect of the overall project, the creation of a new pedestrian access at Clifton Street will be omitted from the scheme at the present time. The design of the scheme would allow for this feature to be easily added at a later date should public opinion change, and sufficient funds be available.

In order to improve accessibility of the park it is proposed to enhance the existing pedestrian entrance point off the back lane to the rear of Colville Street, adjacent to the play area. A section of the existing hedge to the South of this entrance would be removed and replaced with fencing to improve visibility for both those exiting the park and drivers passing along the lane. There is the potential for a simple ‘chicane’ feature to be constructed from steel fencing (to match existing) to slow pedestrians as they approach the back lane, preventing users, particularly children, from running directly onto the lane. Suitable signage could also be installed (subject to planning conditions) to signpost the back-lane entrance to pedestrians approaching from Clifton Street/Colville Terrace and within the park to advise park users that they are exiting onto a back lane open to vehicles.

Cllr Nigel Christian, Portfolio holder for Environment and Transport, said: “We would like to thank all the residents and members of the local community that took the time to take part in the consultation. The overall feedback was extremely positive. Residents and park users are clearly enthusiastic to see investment in the site, which remains a valuable community asset. Their views have had a big impact on the final plans.”

Following the consultation, the City Council is now developing the final plans with a local landscape architect. Works are planned to start in late 2019/early 2020.