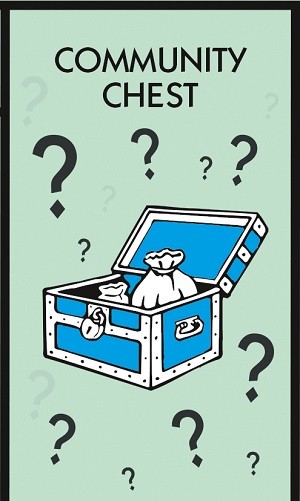 Three local charities are being sought from this morning – to ‘Pass GO’ on the new official MONOPOLY game for The Lakes, it is announced.

The charities will get to star on the board –  on each of the game’s three Community Chest spaces.

“It’s our way of thanking the public for getting behind the game so very enthusiastically,” says George Shrimpton, Custom Games Executive at Winning Moves UK, makers of the new game under license from MONOPOLY owners Hasbro.

To qualify the charities have to be “clearly Lakes focused”, adds Mr Shrimpton. And they must also be currently registered with The Charities Commission.

The new game has attracted very many thousands of votes so far from the public.

The unique edition will see Lakes landmarks replace the classic London MONOPOLY classic streets like Mayfair and Park Lane. Suggestions have been pouring in from the public since it was announced last month that the region, which attracts 12M tourists a year, is ‘Passing GO’.

“The response since our announcement has been fantastic,” added Mr Shrimpton. “We would like to formally thank each and every person who has sent in nominations. As our way of a thank you, three Lakes charities will now get to star on their very own Community Chest spaces, which we will feel is appropriate bearing in mind the ‘community’ aspect.”

The game generally will feature the great and the good of The Lakes.

The edition will see:

Around 30 Lakes landmarks replacing the famous London spaces and streets. Each will get to feature on their very own prime MONOPOLY real estate.

Chance and Community Chest cards – these will be themed too.  A popular suggestion has been that players should be fined or sent back three spaces for speeding in a speedboat on any of the Lakes.

The new edition will be available from next spring. Charity votes to: [email protected]  Polls close at 23.59pm on 16th October 2019.

A person was taken to hospital after becoming trapped in the rock armour on the shore of Whitehaven yesterday.