Buckets of support for Rosemere at this year’s Torchlight 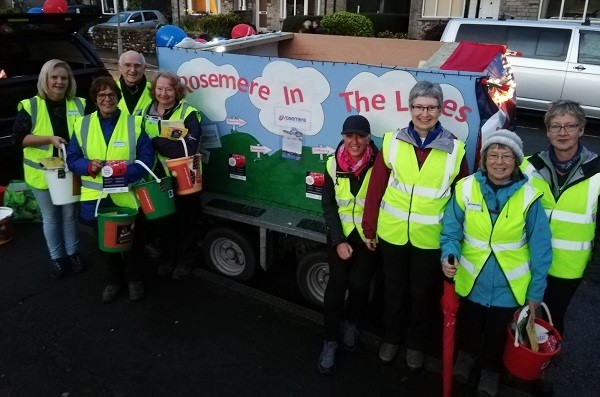 Spectators at this year’s Kendal Torchlight gave Rosemere Cancer Foundation buckets of support as volunteers walking alongside its float (pictured with the charity’s local fundraising co-ordinator Julie Hesmondhalgh, third from the right) collected donations, which raised £418.42.

Among those collecting for Rosemere Cancer Foundation this year was local MP Tim Farron, a long-time campaigner for improved cancer services for local patients. Julie Hesmondhalgh said: “I’d like to thank all our volunteers and everyone who donated for such a wonderful show of support with special thanks to volunteer Liz Nelson for designing our float.”

Rosemere Cancer Foundation works to bring world class cancer treatments and services to cancer patients from throughout South Cumbria and Lancashire being treated at Rosemere Cancer Centre, the region’s specialist cancer treatment centre at the Royal Preston Hospital, and at another eight local hospital cancer units across the two counties, including those at Westmorland and Furness General Hospitals.

The charity funds cutting edge equipment, research, training and other cancer services and therapies that the NHS is unable to afford.